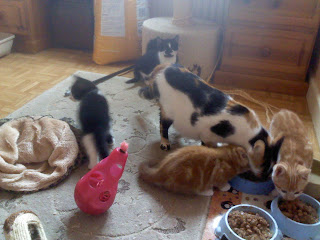 You don’t often hear about the lengths RSPCA staff go to to rescue and rehome animals. I think this is partly because the staff take it in their stride that this is simply what they do. I think it is also partly because good news doesn’t have the same newspaper appeal as a bad news story. And I think it is also about modesty. This week I have seen, heard and even participated in what I would describe as ‘going above and beyond’ and I wanted to share with you some myth-busting acts that have taken place over the last 7 days that I know about.
The first to astonish me was the dedication of an Animal Welfare Officer friend of mine located in the South Yorkshire region. She’d had a run on rescuing ferrets and had run out of places locally to put any more. So, she casually told me that (once she had nursed him better in her own home)she would be taking a trip up to Hull to make sure a ferret had the chance to find a forever home.
The same Officer was actually ringing me to see if we had any rabbit space. She and some of her colleagues had a number of rabbits they had been taking care of in their own homes (one for two months) after rescuing from various incidents/investigations. When I agreed to take all four she went rounding up all the rabbits she and her colleagues had rescued and drove them all the way to us in Manchester. (Only for three more to require assistance later that day. No doubt they went home with her.)
Unknowingly I performed a similar act this week when an adopter rang to say her timid cat was getting the better of her when it came to getting her in the carrier for a vet trip. Without a thought I offered to go round to help at 8am one morning (setting off at 7.30am). I didn’t think twice about this but it was later pointed out to me that this was an example of how RSPCA staff regularly go above and beyond for the animals. (Poppy cat made it safely to the vets, and on time, but she was a tricky ‘customer’!)
But perhaps the most remarkable act this week happened yesterday. I hope it gets media coverage because it truly is incredible. It involved a Jack Russell getting stuck up a tree. Well, actually, getting stuck up inside the tree! Our intrepid Inspector Heaton spent five hours chiseling away at a knot hole in a tree where the dog had got stuck inside. Firefighters were on hand assisting too, but it was Inspector Heaton and the owner that spent a total of five freezing hours outside with gritted determination to free the overly inquisitive pooch.
The reason why Inspector Heaton shared the story with me was because it was a tool that our branch had purchased for his inspectorate group that had helped finally free the dog and reunite him with a very grateful owner. Now, of course, it’s not the branch connection I’m highlighting here but the extent to which the amazing staff of the RSPCA go to to aid animals. And do you know what? This is not a one off, or an occasional thing, but a daily occurrence; it’s just that we don’t get to hear about them as much as we should because the staff just take it in their stride that it’s just what they do.
Well, I think all the officers and inspectors are amazing and I cannot applaud them enough for getting up each and every day and doing what they do. But they are not the only ones who are fantastic. This week my team have been even bigger troopers than usual as we’ve had to cope with being one down and lots of new admissions.
I am so lucky to be surrounded by such hard working and dedicated people. Freezing my toes off on a very cold Sunday morning with the Sunday dog team today only served to highlight how lucky me and the animals are to be part of something so special. Team M&S – you are the best!
Above is a picture of Holly mummy and her kittens – I know it has nothing to do with the rest of the blog but we all love a coo at kitties! Two have already been snapped and we have two boys remaining who would like to be rehomed together.