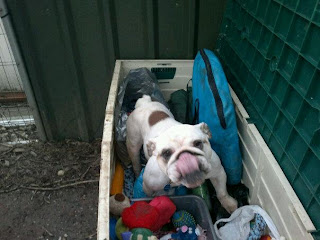 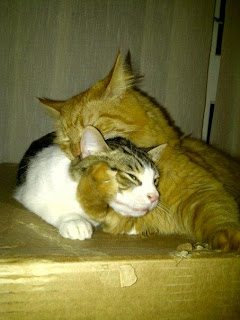 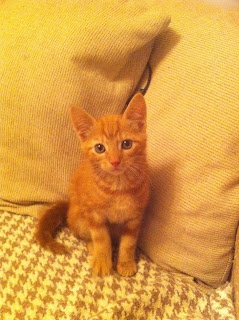 Well, it may be a slow first week back for most of the country but for us it’s been full speed ahead. What a busy week! I think I’ve been at the vets every day this week and next week is looking no different.

We have a very poorly Samantha bunny and Cain cat, I’ve actually lost count of how many new cats we’ve admitted, we have an adorable new kitty too who was found stray on New Year’s Day (pictured above) and let’s not forget Lola the bulldog – that face could sink a thousand ships (see above).

Going to their new homes have been Huey, Kanga and Roo buns as well as Maisy and Florence kits. There is still little interest in our dogs despite Oscar being an amazing boy and Sadie being so loving and Brandy being very funny indeed! I know it’s just the time of the year but all the while the dogs are stuck in kennels. The only saving grace is that the weather has been so mild. I always dread winter in the kennels, but so far we’ve been lucky weather-wise and I really hope it stays that way for their sake.

Next week sees the arrival of 4 more rabbits from the Yorkshire region. The area is desperately struggling with rabbits and ferrets and whilst we can’t help with the latter we are doing all we can to help with the buns. That’s going to be at least 15 we’ve taken from the region recently. Neutering and a ban on selling them in pet shops would solve the problem so easily, but that is just a mere pipe dream.

And I’m delighted to report that Kato cat has finally been reserved (as has newbie Jessica). So, it’s just our adorably naughty Timmy that we need to find a home for, as he will be our longest waiting cat then.

Timmy is without doubt my kind of cat. Very high spirited, full of playfulness and bursting with mischief. He may be an adult cat but he is every bit the kitten, which I’m guessing is the reason why he’s not been snapped up. Well, teeth and claw play does tend to be a bit off putting in an older cat, but I love it! I’m just surprised his stunning good looks haven’t won someone over yet.

My favourite image of the week is undoubtedly that of our former charges Murray and Mitzie (pictured together above). I just love the fact that Murray has Mitzie in a head-lock whilst he’s giving her a right good ‘spit wash’. It puts me in mind of the people who you hear saying ‘animals are boring’ or that they ‘don’t like them’. Well, stick that in your pipe and smoke it!

Which reminds of right good laugh I had this week. It was due to the comments section of an article on the Daily Mail website. The article was a peculiar one: about a cross-eyed woman who had lied to an animal sanctuary in order to be seen to be meeting the criteria to adopt a puppy. I truly do not understand why this merited printing, however, the ‘entertainment factor’ was supplied in abundance in the comments section.

The section was filled with the usual diatribe about how awful the various leading animal charities are but then some of the postings went off on a tangent about how dirty and horrible dogs are. They got more and more ridiculous but the best one of all was from someone who suggested we should round up all the stray dogs and ship them over to North Korea because they will ‘put them to good use’. (And the tone really did suggest that they meant it.) At this juncture I was howling with laughter at just how ridiculous some people are but then you soon find yourself confronted with it in ‘real life’ by the multitude of calls we take that defy belief.

These most typically arise in the form tea-time calls about a pet that has been sick all day or for several days in a row. The emphasis being on tea-time here, when the vets are shut yet their animal has been suffering for hours or days or even weeks prior. I promise you this has become a regular occurrence every Friday, without fail. They usually start around 3.30pm onwards, so this time-slot along with Monday mornings have become my loathing periods.

But I think what really hit home for me this week was when I was at a primary school talking to different classes about the work we do. I had taken along a display of the 9 animals up for ‘Best Rescue’ (the voting has been extended due to our website being down, such a nuisance). The children wanted to hear all the stories, to which I did my best to sanitise/pare down, and they all rather brilliantly punctuated the tales with great sound effects. But it was actually the teachers’ comments afterwards that really struck a chord: ‘I’ve learnt so much’ and ‘I didn’t know that you did all this’ and ‘that was really interesting’. It made me wonder what more we can do to share with a greater audience just exactly what we do. But then I got back to the office and discovered that perhaps we are beginning to find these ways already………

This week I have had email contact with a lovely lady called Claire, who was keen on adopting one of our cats. She told me that she had come across our Facebook and blog and after reading about what we do she said she will be supporting us more in the future. That really made me smile because someone had taken the time to read between the headlines (so to speak) and learn for themselves what we really do. Claire’s comment were exactly what I needed for a pick-me-up and I’m truly thankful to her.

Here’s to another challenging week ahead and more space juggling!