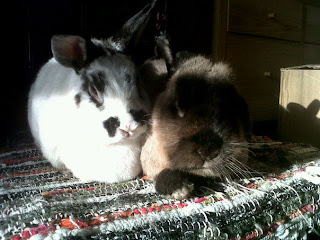 Since childhood I have been in love with rabbits. I think the only thing that rivalled my fascination and devotion to them when I was knee-high to a grasshopper was Sooty, Sweep and Soo! My passion for rabbits, is to this day, as strong as ever and as inexplicable as ever. Rabbits have truly become my life-long preoccupation and, if I’m honest, the driving force behind my commitment to animal rescue and welfare.

For me, rabbits have two selling points: their intrinsic beauty and the subtlety of their behaviours. Now the latter is obviously because they are hard-wired to hide from the world, but if you actually take the time to learn their subtle ways you get to unlock a deeply fascinating species. I like to think that true bunny-lovers are an intelligent breed of humankind because we share the patience and determination to learn the lagomorphs.

I never truly realised just how much I understood bunny behaviour until recently. A series of encounters with bunnies and their owners has demonstrated to me how much I take for granted my insight into these creatures and, if anything, how much I have surrendered to their dominance in my life!

I share my home with 7 of own my own and 1 foster bunny. What seems to have happened is that this experience has become normalised in mind and I forget that this is not everybody’s experience of their ‘pet’ rabbit. The characters that are in my home are so diverse and illustrative of how much they are abused and misunderstood.

My longest stay rabbit is Larry. He is the first bunny our branch admitted back in January 2008. Larry was stray in a very rough area and had evident dental problems. The most likely scenario was that he had been fed a diet of dried food. So, coupled with his Netherland Dwarf features he developed costly dental problems. Larry was slowly introduced to a hay and greens diet and over time I have managed to get his teeth stabilised. He does have tooth-root flare ups that require pain relief but on the whole is one very happy bunny boy.

Domino came from the RSPCA’s Pet Retreat scheme. He came in with his brother and came straight into foster with me because they had such shocking dental problems. Domino’s brother didn’t make it; overgrown teeth and gut stasis saw to that. But I adopted Domino after he and Larry decided they were going be best mates. It was a battle to re-educate Domino’s eating habits. He had obviously been fed on dried food and little else, as vegetables and hay were alien to him. To be honest, had it not been for him and Larry becoming best friends I would have had to put him to sleep because we could never have rehomed him. Instead, Larry and I adopted him and the credit card gets a regular bashing for his vet treatment and he is, without doubt, the love of my life!

Mildred-cowbag (pictured, left) – so named because she absolutely hates me. If looks, lunges, bites or grunts could kill Mildred would have had her own way by now! Mildred was found stray in a park at Easter 2008. It was so apparent from day one that she was aggressive through poor socialising and mismanagement. She came straight into my foster care that Easter Bank Holiday weekend and never left. We could never rehome such an aggressive rabbit, but moreover I couldn’t be parted from her. I had fallen in love. Mildred rules the house with iron teeth but I don’t mind, not even in the middle of the night when she sits and waits in the doorway of the bathroom to bite my ankle as I enter sleepy and unaware. She is formidable.

Ollie-Dollie (pictured, right) is possibly one of the most thickest rabbits I have ever met. He is a lop, and generally they are quite happy-go-lucky bunnies, but Ollie-Dollie is plain stoopid. He is Mildred’s best friend and together they complement each other effortlessly. Ollie was a ‘case’ animal and I brought him home to foster because he was on long-term treatment for respiratory infection. His owners were prosecuted for neglect. When he was eventually signed over to our care me and Mildred had fallen in love with him. So now he lives in a delicate balance of snot and sneezes and lots of love. He is picture-perfect with a head full of cotton wool for brains – he gets lost when he goes upstairs and I have to carry him down! He even has a litter tray and water bowl upstairs in case it happens when I’m out! I love Ollie-Dollie, he is such a wally.

Joy and Trisha came from another shelter. They had been unwanted children’s pets. They lived there for nearly 3 years without anyone interested in adopting them. When the shelter was struggling we took in a number of their animals, including these two. After 18months with no interest in them, and Joy starting to show signs of ill health, I brought them home to die. Well, so I thought; ha! That was over two years ago and we have only recently lost Joy. Trisha is ailing but well and truly holding her own. We estimate them to be around 8 years of age, so please don’t be thinking bunnies have short life spans. The average age for a rabbit is 8-10 years but I have had bunnies live to 11 and 12.

Biggun is a British Giant. He came from a multi-animal rescue of 92 animals. He was one of only two rabbits in the case. After very many months his owner was successfully prosecuted for neglect. Biggun was kept in such a small cage that he couldn’t even raise his ears. His early life experience has seemingly scarred him for life and I kid you not he is agoraphobic. After lots of trial and error he now lives in a pen. It is by no means what I consider to be sufficient in size but it’s all that he can tolerate. He is a moody lad but at his absolute happiest in his pen, with his mate and with food! Biggun is brilliant but I would do anything for him to be brave and to be able to enjoy a better life.

Lastly, Jemima. I actually can’t tell you her full story, but what I can tell you is that she was an unwanted children’s pet that was thrown away in a park. When she was rescued she had a new born litter of 10. Jemima has never lessened in her anxiety of humans. The most progress I have made is getting her to take food from my hand. She is painfully frightened of close human contact and this behaviour speaks volumes and demonstrates how greatly she has been betrayed by humans. Jemima lives happily with Biggun, in her own world with everything on her terms (except for claw clipping and vet trips). Jemima never stood a chance finding a forever home, she is simply too messed up. She is both my biggest failure and biggest triumph rolled into one.

Over the years I’ve shared my home with well over 100, maybe more like 200, rabbits that I have adopted or fostered. On top of that I have helped to care for in excess of a thousand in rescue environments. The reward for helping these vulnerable, charming, complex, beautiful creatures is indescribable. Some of my greatest achievements in life have been with the most ‘damaged’ rescue rabbits. Giving these animals a second, third or fourth chance is what I live for. Rabbits are simply amazing.

Giving a rabbit as a present at Easter is at best a cliche and at worse another statistic of neglect.