Behind the Scenes Series: Stanley the cat

Stanley is a splendid lad who has been on a long journey since first arriving in our care on the 16th of June 2015. He was originally found stray and limping by a member of the public in South Yorkshire. He was subsequently X-rayed and given pain relief but as no one in the area came forward to claim him he was transferred to us for treatment and rehoming. 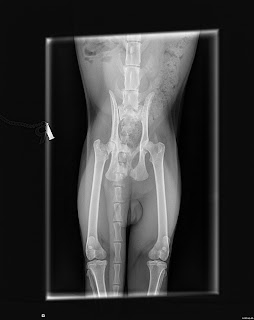 The X-rays revealed that Stanley had fractured the neck of his right leg as well as his pelvis! Thankfully the brakes were healing correctly on their own so there was nothing we could do to help other than keep him happy and calm on cage rest. Thanks to his lovely nature he coped well on cage rest, most cats find it very frustrating, but during the whole 6 weeks he remained calm and content.
Stanley’s recovery was slow but he finally was given a bit more freedom and put on room rest where he could start to walk around and build up the muscle on his leg. Unfortunately, at around the same time, Stanley started with a bad bout of diarrhea. After a check up at the vets and a course of antibiotics it still hadn’t cleared up so he was put on a sensitive dry food diet which has made a massive difference.
Since changing to the new diet and being given the freedom to run around his foster home he is now full of the joys of life. He has been the perfect patient and his foster family are very fond of him and say he is a real sweetheart. This is what they have to say about him:
“Stanley is a really lovely boy. It takes him a little while to get to know you, but when he does, he is very affectionate and loves a cuddle. He is very energetic and tears around the house when he has his ‘mad half hours’, liking nothing better than skidding along the laminate and crashing into table legs. He loves his toys and likes using the scratch post.
Stanley is also hilarious….he is fascinated with his reflection in the mirror which he seems to think is another cat and dances on his tiptoes around our own cat (who treats him with general disdain). Stanley has never scratched or hissed at us, even when giving him tablets: he accepted this quite passively. In his short life so far, despite his injuries, he has learned to accept whatever his situation is quite happily. He will make a fantastic pet and absolutely deserves a loving new home. We have loved having him here, but as he is in foster care, he hasn’t been able to play out, which we think he is eagerly looking forward to!”
After 8 long weeks Stanley is finally ready for adoption and we hope it won’t be long until he’s enjoying the great outdoors, climbing trees and snuggling up in his adopter’s arms.
Animals like Stanley take a lot of time and effort from our staff and volunteers to get them ready for their new homes. If you can offer Stanley a new home please get in touch!
There are also many other ways you can help our animals!
1. Make a donation or set up a regular Direct Debit – any amount would make a huge difference to our animals lives.You can TEXT MCRS01 £1/2/3/4/5 or £10 to 70070
2. Fundraise for us! We always have an event or two planned… For example, in September we have an abseil down the Trafford Centre and in October our ‘Big Walkies’ sponsored dog walk. Why not get involved and raise money for our animals at the same time?!
3. Donate your unwanted clothing, jewellery or bric to our charity shops! Our charity shops are located in Chorlton, Didsbury and the Northern Quarter, city centre and help to fund our work. We can turn your donations into funds to care for our animals. We are also always on the look out for volunteers to help in our shops so if you are interested just get in touch!
4.  Adopt one of our amazing animals! We always have many cats, rabbits and guinea pigs for adoption. If you are looking for a new best friend look no further!

5. Foster a feline! At the moment we are in need of more foster carers for cats, kittens and nursing queens. If you live in the South Manchester or Salford area and think you could help please contact us on 0161 882 0680 option 4.