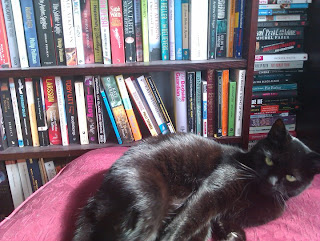 Guest blogger Becky Day-Preston debunks the myths about black cats for a Halloween Special:
Did you know that black cats take three times longer to be rehomed than cats of other colours? I know, it seems totally ridiculous, and as the owner of a black cat, I take personal offence!
I have had my black moggy, Alan, for three years, and he is absolutely fantastic. He was a rescue cat, adopted from the mean streets by a lovely lady and her family, who then had to give him away because times were hard and they just couldn’t afford to keep so many pets. When I met Alan he was still practically a kitten, tiny and timid, and totally adorable. And he still is, having grown into a big, sleek, confident little git who I can’t imagine not being around. He has a white spot the size of a 5p piece on his chest, which I like to call his ‘cravat’ when he sits proudly, like a Victorian gentleman.
Imagine if I’d taken one look at Alan, and said “I don’t want him; he’s black!” I would have been denying myself the pleasure of knowing one of the best cats in the whole world, and I would have been denying a poor, shy little cat his chance at a loving forever home, all based on a superficial prejudice. In that situation, nobody wins.
But why are people so averse to a sooty moggy? The only reasons I can think of are witches and bad luck. Except that this is 2011, not 1611, and we’re pretty much over the whole witchcraft thing (seriously, read The Crucible!). And as for the idea of a black cat crossing your path being bad luck, I’d say I’m living proof that that is complete bunkum: Alan must cross my path at least 10 times a day (in fact, he sometimes careens directly into my path, and my ankles) and I consider myself a generally lucky person. Superstition is ridiculous, and completely outdated, so that leads me to think that people are rejecting black cats simply on aesthetic grounds, which is just plain ridiculous on two counts. Firstly, black cats are gorgeous, and I won’t hear anyone say otherwise. Secondly, and most importantly, it is that sort of superficial attitude that means that it’s not just black cats losing out, but also those who have been scarred and injured in their previous lives.
I could go on for hours about how awesome my Alan is, how he has adopted the footstool as his own kingsize kitty bed, how he goes nuts if he even catches sight of a ribbon, how he chases my boyfriend round the flat every morning, chirruping, and how he welcomes me with a big meow when I come home from work. If I had rejected him, I would never have gotten to know him, and the real tragedy is that if you reject a black cat (or one with a ratty tail or a gammy eye, for that matter) you could just be rejecting the best cat you ever met.