Down but not out

It’s hard to believe it but this is Catherine and mine’s 5th Christmas at the branch. The branch today couldn’t be any different than it was 5 years ago; not only are we bigger and better than ever before but this is the busiest Christmas we have ever known.

Traditionally, at this time of year, everything grinds down to a slow pulse and gives us the chance to breathe, catch up and take it a bit easier after a hectic year, but this time round there has been no such let up. After the busiest summer I have ever known, a relentless Autumn followed and now we are facing the nationwide sadness that so many people are facing such an unhappy Christmas due to prevailing economic hardship. It’s been all over the local news this week that more charity food banks have opened up in response to need. Of course the  more people who are struggling to even feed themselves it becomes inevitable that pets become a luxury that less and less can afford. Ultimately animals are abandoned, because all the shelters are full, but the methods and means vary so much that sometimes my compassion wanes whilst at other times it couldn’t be stronger. This week has seen no shortage of animals being admitted to the branch due to the financial hardships people have been facing. So, here are some of the new charges:

We’ve also admitted another cat who was taken to a vets after being in a RTC but never claimed; I can’t help but think the owners just couldn’t afford the vet bills. Next week we see the arrival of this little lad, below. He was abandoned in a box and found on 14th Dec. He was very poorly, probably suffering from exposure to the extreme temperatures. He’s been recovering at the RSPCA vets and I’m hoping we can pick him up Xmas Eve and take him to his foster home.

We’ve also had heartache this week over a dog who was abandoned by his owner but turned out to be a banned breed. Verification of his status by authorities meant that we had to comply with the law. As many of you know our branch opposes Breed Specific Law but it doesn’t mean we are above the law. As much as I wanted to do a blog with pictures of this awful waste of life I feared the repercussions were too great. Instead, I mark the horrid occasion by sharing the life of an animal that deserved better than to be judged by his breed.

But as much as there has been hard work and sadness this week we have seen kindness and generosity from people too. The puppies were the first to enjoy this giant parcel of goodies donated by a customer of the Urmston shop. 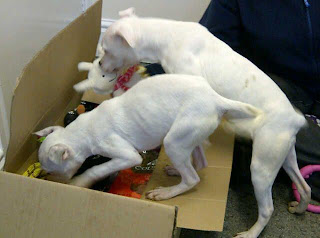 The gravy bones were the most popular with the pups but Blue loved the toy penguin and the the treats! But what Lady loved more than anything was cuddles after an epic rain soaked walk on Saturday that left us stranded in a flooded field, but we made it home in the end thanks to our dog walker Chris’ handy phone app and resilience. The rain was so bad that we actually couldn’t see where we were going!

And I mustn’t finish this bloody without sharing a Christmas miracle we had so longed for, the adoption of Jack and Carson our long stay black cats. Within 24 hours of being reserved the home visit was done and they were settling in to their new home. This has undoubtedly been the best news of December and we are so grateful to their adopters for giving these wonderful boys the home that they deserved. It is such a crime they were overlooked for so long but what it did mean is that we selfishly got to enjoy their company week in week out. The cattery already seems odd without them but we are so thrilled they have homes for Christmas.

I hope that you have all enjoyed following our work this year through the blog. Above all I hope you have received a good sense of how dedicated we all are to our work and the animals that come into our care. Whilst I would cheerfully like to be out of job I can’t see it happening any time soon, and I feel that 2013 will be just as chaotic, challenging and immense as 2012. I’m looking forward to doing it all over again with my very wonderful staff, volunteers and supporters by my side. Thank you everyone for being such a kind, caring, compassionate bunch of fabulous people. All I can say is thank goodness me and the animals have you in our lives. From all of us at RSPCA Manchester & Salford Branch we wish you a very peaceful and loving Christmas, whoever you are with and wherever you may be.