by RSPCA Manchester and Salford Branch | May 3, 2010 | Blog, Uncategorized | 0 comments 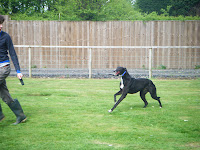 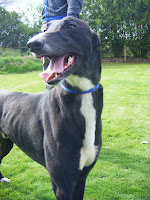 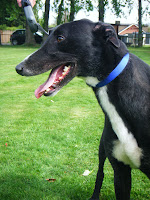 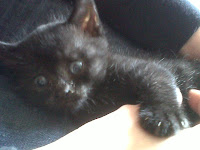 I went to see Oscar on Saturday and in a week he has doubled in size and doubled in cheekiness! He was an absolute delight to watch him awkwardly run around, pounce and chase and generally being a cutie pie! He was introduced to his first taste of kitty food later that day and his foster mum reported that he LOVED it.

Oscar’s foster mum and dad are doing the most wonderful job and I was so chuffed to see they had been keeping a chart of how much greedy mcgreedy was eating each feed. When I visit him next week I will take more pics and share his development…he has yet to learn litter tray (he’s too young yet) which meant that both me and his foster mum got covered in pee – oh the joys of babies. (Give me a furry one any day.)

So, as promised, an introduction to our gorgeous new greyhound Jack. He came into our care late Thursday afternoon. He had come to our attention via a member of the public because he was consistently being put out in the owner’s backyard.

The story has it that he was owned by an elderly gentleman who had a lifetime of ‘belongings’ in his home, piled high, with just pathways through rooms in his house. He had another very elderly dog who was sedate and used to the pathways, but with Jack being only 3 and quite a big lad he kept knocking over the piles of ‘belongings’ so the elderly man kept putting him outside.

So we got to learn about the situation and found that the owner could not cope with Jack so we offered to take him in, and I’m so glad we did. I haven’t yet him met but everyone who has has given me the most glowing feedback, like Hannah, yesterday:

“Jack is absolutely gorgeous. He’s so soft and would rather sit and be fussed than run around. But when he does run he runs along side you and very good at walking to heel. We took him out with Prince and he wasn’t bothered, Prince seemed to like him too. He greets everyone like there his long lost friend!

It’s made me want a greyhound – so easy to handle. Hard to take a picture ‘cos he just keeps coming over and trying to sit on your knee for a fuss!

Covered in fleas though poor laddy.”

(Don’t worry, he was treated for fleas the day before and they take while to die.)

I really hope it won’t be long until Jack finds a wonderful new home, like our dog Princess, at last!

I told you about her a little while ago, having been kept indoors and in her own excrement for 6 months and then abandoned over a long weekend and drank the toilet bowl dry. Well, she had a viewing on Saturday (one of many but these folks actually showed up) and they fell in love with her. So the home visit is underway and if all is ok she should be a Wallasey beach babe by next weekend, how cool would that be!