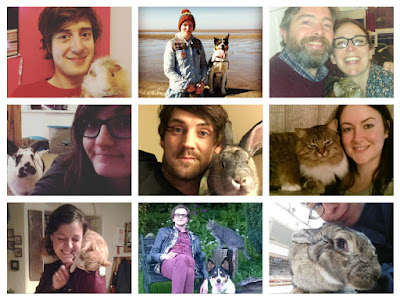 Our branch is famous for coming up with wacky ideas to raise money for our animals. Whether it’s abseiling down a lighthouse, zip sliding across the Bridgewater Canal or shaving our heads – we’ll do most things to help more rescued animals! Sadly, the demands on us continue with increasing numbers of unwanted, neglected and abused animals in the local area needing our help. It costs us nearly £30,000 per month to run the branch and we have to raise this money from public donations.
So what have we decided to tackle for our next big fundraiser? 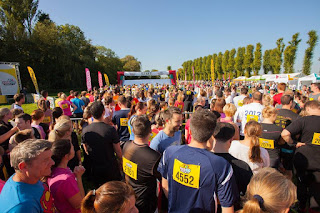 Well, on the 30th April 11 amazing volunteers (including 2 of our super duper staff) will be tackling something quite different. Not your usual road race, oh no! We’ll be doing a 5K but taking on 10 of the greatest inflatable obstacles on the planet! This includes the world’s largest inflatable obstacle and the finale is Europe’s biggest ever inflatable slide! Most of us are afraid of heights so it definitely should be interesting…. Our target is £750 can you help us?
You can sponsor Team M&S easily online by clicking here or by texting GUNG55 £1/2/3/4/5 or £10 to 70070
So who’s taking part and why?! 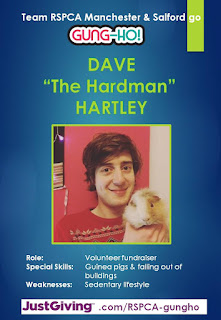 Name:  Dave Hartley
Role at the branch:  Volunteer at events and generally help out as much as I can!
Involved with branch for:  6 years
Why I volunteer:  I genuinely can think of so many amazing animals that the branch has helped I really wouldn’t know where to start. As they prioritise the animals most in need (those rescued by National RSPCA inspectors) the majority of the stories are pretty horrendous. However, whether it’s a rat or cat, rabbit or guinea pig the branch will do their best to bring them back to health, get them trusting people again and find them a well-suited, loving home.
Thoughts on Gung-Ho!:  I don’t do any proper exercise so the whole experience is going to be very interesting but I’ve abseiled down a lighthouse, the Trafford Centre and across the Bridgewater Canal in Salford Quays for the branch so how hard can it be…….!? 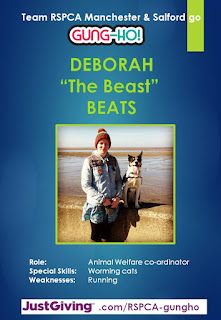 Name:  Deborah Beats
Role at the branch:  Animal Welfare co-ordinator and foster carer to furry things.
Involved with branch for:  4.5 years
Favourite animal:  There have been too many, my heart belongs to hundreds of small furries. But I guess it would have to be Cheryl, my old black foster cat who hung around the cattery and then my house for a total of 6 months. She had IBD, bald patches and struggled to gain weight but in the end we got her fit and well and she found the best home imaginable with one of our long term volunteers. Happy ending!
Thoughts on Gung-Ho!: I’m dreading running, and just moving at a pace faster than strolling really. My greatest fear is getting left behind and watching everyone else who is much fitter than me vanish off over an inflatable bridge. I am looking forward to sliding down an inflatable slide though, there is one right!? 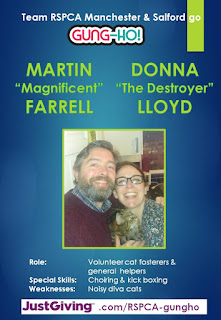 Names:  Donna Lloyd and Martin Farrell
Roles at the branch:  Volunteer cat foster carers, but we’ve done all sorts over the last 8 years including dog walking and office support
Involved with the branch for:  8 years
Favourite animals:    We’ve really loved having our little foster cats to stay with us and they’re all really special but I think Rumple and Rocky our 3-legged cats have definitely stolen our hearts and of course the lovely Hedgehog, our most recent house guest, who was just a star!
Thoughts on Gung-Ho!: We’re really looking forward to this event – spending the day bouncing around on bouncy castles sounds brilliant and not something you get to do very often at our age! 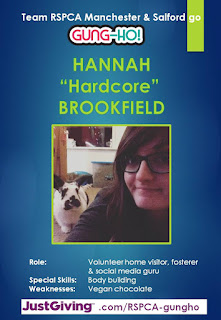 Name:  Hannah Brookfield
Role at the branch:  I run the social media and the website. I also do home visits, events, fundraise, design posters, foster and some dog walking and cat cuddling in my time too! All on a voluntary basis
Involved with branch for: 7 years
Memorable moment:  A case of over 300 rabbits and guinea pigs that we helped with. We agreed to take on about 35-40 of the animals (the rest going to other branches) and my gosh, it was a real eye opener! It was hard work transporting them all (I think the rescue was Hull way), health checking and getting them settled in. Many had terrible conditions particularly bad. The staff and volunteers spent so much time getting them ready for adoption and it was so rewarding to see them eventually find loving new homes.
Thoughts on Gung-Ho!:  I’ve run a marathon for the branch so you’d think this would be easy! However, it’s a totally different kettle of fish so I’ve been practising with some resistance training for those climbing walls! Hopefully, the fact we are in a big group will help push me on – I don’t want to let anyone down, including the animals we need to rescue in future! 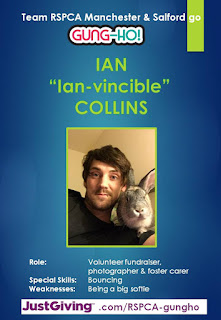 Name:  Ian Collins
Role at the branch:  Volunteer fundraiser, photographer and foster carer
Involved with branch for:  2 years
Memorable moment:  How everybody fell in love with the rats and they all found new homes so quickly
Thoughts on Gung-Ho!:  I’m super excited to bounce around like an idiot whilst raising money for all the lovely animals 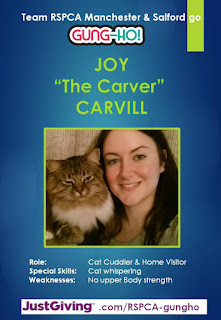 Name:  Joy Carvill
Role at the branch:   Volunteer cat cuddler, cat home visitor and event support.
Involved with branch for:  Just under 2 years
Memorable moment:  The one that sticks in my mind the most is of course Toby; a stray found with a sore paw in late 2014. I hadn’t been cat cuddling very long and found a lump behind his ear at the cattery. I was shocked and saddened when it was found to be an airgun pellet under his skin which had to be removed by the vet. Despite what had happened to him Toby was a quietly trusting, lovely-natured boy who found a good home through the branch.
Thoughts on Gung-Ho!:  I am looking forward to tackling Gung Ho with the RSPCA team but apprehensive about getting over high obstacles – my upper body strength is rubbish! 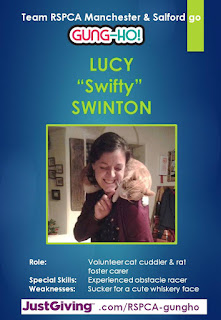 Name:  Lucy Swinton
Role at the branch:  Vounteer cat cuddler, previous dog walker, and new ratty foster-er!
Involved with branch for:  2 years
Memorable animals:  I’d have to say the rat boys in my care at the moment! And Nico the dog. And Randall the cat.
Thoughts on Gung-Ho!:  I’ve done a similar event to this before – so looking forward to it, especially inflatable obstacles! 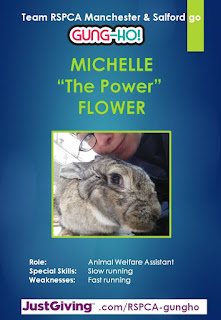 Name:  Michelle Flower
Role at the branch:  Animal Welfare Assistant
Involved with branch for:  4 years
Favourite Animal:  Teddy the Lhasa Apso stands out in my mind. I collected him in October 2014 from an inspector who had rescued Teddy from a home where his owners hadn’t cared for him properly and let his coat get severely matted. We didn’t know, until he literally tumbled out of the van, that his eyesight had also become impaired. It was touch and go with Teddy for a while as he was in such a sorry state, but after a spell in foster care he was adopted. Last year he came to support us at the Big Walkies and it was lovely to see him so happy and well. I cried. A lot.
Thoughts on Gung-Ho!:  I am concerned my big fat arse will be mistaken for an inflatable obstacle. 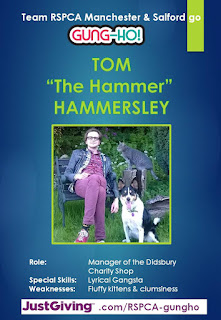 Name:  Tom Hammersley
Role at the branch:  Manager of the Didsbury Charity Shop
Involved with branch for: 5 and a half years
Favourite animal: In the early days of our fostering we had a beautiful fluffy black cat called Cherry in our care. Despite having had a tough start in life living on the streets before she was rescued by the RSPCA, she was an incredibly affection cat. She’d always be sweetly mewing and nuzzling me or standing on her hind legs and waving her paws around for my attention. She was such a good fit with our family that I couldn’t imagine a life without her. We adopted her and renamed her Ponyo and we’ve been best buds ever since.
Thoughts on Gung-Ho!:  As a clumsy man, I am looking forward to running around in a soft inflatable environment in which falling over doesn’t hurt. However I am little concerned I’ll overdo it and throw up in front of everybody.

To get in the spirit of the challenge ahead check out our video!

Thank you for your support, we’ll be sure to update you with pictures after the event!