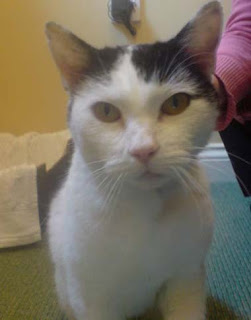 Despite having endured an extremely frustrating last hour trying to help a stray, elderly dog that has been found in a local park, we have actually had quite a positive day. But let me tell you about the dog first.
The dog was found by a member of the public and taken to a vets to be scanned for a microchip. There was none, so the dog warden was called but they refused to collect because she had mammary tumours! The dog was at the vets we use so they, naturally, asked if we could help. I got tasked with the job of trying to sort it out but it was deeply frustrating because there is so little we can do because national RSPCA aren’t able to help because legally (and financially) the responsibility falls on the Local Authority to deal with all stray dogs unless it is absolute emergency like an RTC. Needless to say I tried everything I could but got nowhere fast.
All I succeeded in doing in the end was getting the cost of emergency treatment covered, registering the dog on the natioanl database as lost/found, and offering to help towards the costs of treating the animal should the finder choose to keep the dog rather than send her to the ‘pound’ cos the reality is that if the dog is not claimed after 7 days she will
be put to sleep because of her health problems.
It is is so infuriating, I just wish people would be more responsible.
Anyway, let’s get on to good news….BBC North West news called today and said they wanted to follow up their brief news item and film a big piece on our animal rehoming crisis!
Jo, our Animal Care Manager, is being the reluctant star of the piece and they are filming her and her foster animals tonight for a piece that will go out at breakfast time tomorrow, and then in the morning they are filming again at the cattery we use, so a further report can be made for later in the day. The theme is on how the recession is impacting on animals, and boy do we have plenty of animal stories to share about how they have been affected.
What we are really hoping is that we will find a home for our mum, daughter and son cat trio, Melissa, Max and Katy. We had a good feature in a local paper recently about them but no firm offer of a home, so this could be our real chance – so paws crossed please, everyone!
The other bit of news that has truly made my heart sing today is that our 10 year old cat Bozze (see pic above) has got a reserve on him. I thought it would take months to find hima new home but he has fallen in love with a really nice gentleman I spoke to last week. He is wheelchair bound and lives in a bungalow in a quite setting, he has had cats all his life and was looking for a new companion. Well, apparently he and Bozze have spent the afternoon together and they get on like a house on fire. Apparently Bozze was the first of the cats to come forward for attention and the two of them just hit it off instantly – I am just soooooo pleased.
You guys are the first to know about it, even the animal staff don’t know about it yet cos I’m working late, again. But what a fabulous end to the day!!!