Happy New Year!
2015 was a busy one at the branch and despite having a part-time member of staff on maternity leave all year we achieved a huge amount for animals in need. Of course none of this would have been possible without your incredible generosity and so we wanted to share with you how your contribution has benefited the animals in our care.
Animal Activity
In 2015 we:
* Admitted 419 animals (we admitted 352 in 2014)
* Rehomed 352 animals (17 more than 2014)
* Completed 355 pre-adoption home visits
* Microchipped 254 animals at community events
* Neutered 31 owned ‘at risk’ cats at a cost of over £1200
The Big Events
We had two big fundraising events this year. In September 24 brave souls abseiled 170ft down the Barton Square clock tower at the Trafford Centre raising a grand net total of £5830 in sponsorship! Big Walkies was at the start of October and saw 117 dogs trotting round Clifton Country Park to help raise over £2,300 for the branch. I’m sure you’ll agree these are both fantastic sums of money and it has meant that we’ve been able to help fund the care of many more animals in need. They’ll be another Big Walkies in September 2016 and a really daring challenge event in June!
A few other things…
Looking forward to 2016
There is plenty to look forward to in 2016!
What else will we be up to? 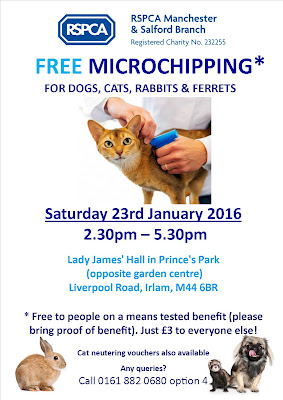 So, as you can see there is plenty to look forward to in 2016! Thank you for being by our side all the way.

All the very from RSPCA Manchester & Salford Branch 🙂