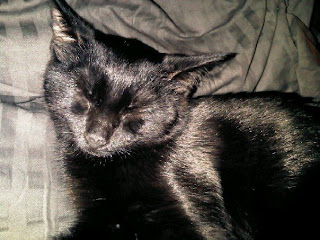 I’d seen a few kittens on the RSPCA Manchester and Salford and the RSPCA Stockport websites (and had wanted every single one) but I was sitting on the settee with my laptop when I saw a picture of this scrawny little black kitten with big ears, sat with his paws tucked underneath and a defiant expression on his face.

Immediately I felt this emotional pull. I started to read his write up…

Beau, or Axel as he was called back then, had been found with his three brothers and sisters on a frozen Christmas Eve in a garden shed. They were only three weeks old, were underweight and had cat flu.

All four were now in foster care, recovered and happy, but it transpired that Beau was profoundly deaf. That was it. I can’t explain it but his deafness sealed the deal, he had this vulnerability that I just wanted to look after him and snuggle him up and protect him. I resolved to adopt him.

Being 9pm, I had to wait until the next day to call, but that’s exactly what I did the next day on my lunch break. I called the RSPCA Manchester and Salford office and answered a few preliminarily questions about my house and lifestyle. There were no problems so I went to the next stage – viewing Beau at his foster home.

Two days later, it was a Saturday afternoon and we arrived at Ben’s (Beau’s foster carer) flat to meet Beau. I was so excited… and nervous. Maybe Beau wouldn’t like me? What if the foster carer thought I wasn’t good enough? We had grabbed some treats and toys to take to them all. Beau’s siblings Rose, John and Yoko had already been reserved but were too little to go off to their new homes just yet, so they were still there.

We greeted Ben and he welcomed us in. All four kittens were tearing about the place, being hyper. I sat on the floor and John walked on my knees immediately. Rose and Yoko were rolling around the floor play fighting. Beau was investigating the treats then he mooched over, nonchalantly.

He was gorgeous. Absolutely handsome. He had big dark liquid eyes and the big ears I’d noticed on his picture. He was a confident little thing too, completely unfazed by the fact that these strangers were picking him up. I cuddled him and he put his paws on my shoulders and licked my hair.

He was defiantly my new baby.

We stayed for half and hour, playing with Beau and his brothers and sisters. We’d told Ben we really wanted to adopt Beau and he sorted our home visit out with the branch for two days later. We excitedly did a trolley dash buying goodies on our way home.

Soon it was Monday. I’d booked the day off work to clean the house (what a loser) and was anxious again, walking around the house critically. We already had Mogwai, my boyfriend’s 4 year old beautiful girl cat. She was instructed to be on her best behaviour later…

The home visitor arrived just before 5pm. She was lovely and had a quick look round the house. I took her upstairs to see Mogwai, who was in her usual spot on the bed. She didn’t budge an inch.

We chatted about types of kitten food, the litter spot, flea and worming products etc. I’d imagined her running her hand over surfaces with a white glove but it was nothing like that all. She told us there and then we had passed and I asked if we could pick Beau up that evening. She said to check if it was okay with Ben to go round but if it was okay with him then it was okay with her!

I text Ben. He said come round! We grabbed Beau’s new carrier and went to get him! I was so happy and excited bringing him home. I couldn’t wait to get him in and let him start exploring.

He was quiet the whole way home. I talked to him, even though he is deaf, I still do as I think he knows.

We got home, opened the carrier and he climbed out and walked straight over to the fishtank and stood on his back legs against the glass. I was snapping away taking pictures, and he pottered from room to room. He galloped upstairs (his balance is totally unaffected by his deafness) and met Mogwai. She hissed and Beau paid NO attention to her grumpiness.

Later that night we went to bed and Beau was clearly shattered from his big day, and I was chuffed to bits when he went to sleep on my pillow. He knows who his Mummy is te he! Mogwai was in a huff and moved from her usual spot at the bottom of the bed in protest (that didn’t last). I did a half day at work the next day and he was next to the fishtank when I came home. This would be his favourite spot. 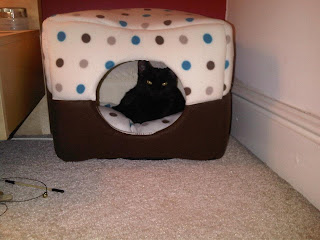 It’s been 16 months since I got Beau. My personal situation has changed in that I have moved back to my family home in November 2011 with Beau.

This has meant that Beau is now living with me, my Mum, our two geriatric family cats, Bertie and Freddie, and a 5 year old rescue dog Mollie. Bert and Fred are both 15 and basically blobs who lie on our beds all day, avoiding doing anything more strenuous than eating and rolling over for tummy scratches. Mollie is a mixed bred, maybe part schnauzer rescue dog, who adores Beau and eggs him on doing naughty stuff. They are really so cute together, it makes me chuckle to hear them thundering up and down the stairs, small footsteps followed by large footsteps!

Beau is very active and LOVES to play. But he’s also crazily affectionate, and loves to be picked up for a cuddle or jump on my tummy and pad away making a bed. He has the cutest little meow that he does whenever I come home that means “pick me up and cuddle me” and he pads my cheek whenever I am asleep and he wants attention. He still sleeps on my pillow every night which I love.

Getting Beau was the best thing I ever did. He is my perfect, beautiful, gorgeous baby boy.

We have a house full of four rescue animals and it is fabulous and I would not have it any other way.”

Next week the story of Archie & Florrie the rabbits….