Getting more and more involved with the RSPCA Manchester & Salford branch was something that we were both desperately keen to do. We both loved volunteering at the cattery we just wanted to do more to help. Knowing that as soon as foster homes were full and the cattery was too then a lot of “No” was being said to cats needing the branches help when it should have been “Yes”. As we mentioned last week the cattery unfortunately closes from time to time when one or two fluffballs get poorly, mid-March 2012 was one of those times.

After nagging Susie for the past few months she finally caved in and asked us for a huge favour, to put up a small tiny girl who was found cowering in an alleyway terrified of her surroundings. We had a spare bedroom, toys galore and enough food to feed 100 cats in the house so we said yes without hesitation. It was only going to be for a week until the cat flu had cleared up and we could pop her back into the cattery, no problems Susie we said, if you need us to look after her for longer then all you need to do is ask.
Felix as she was called then (as you can see from the picture below, complete spitting image of the Felix cat) was fairly timid to start with, she settled down a fair amount after her first sachet of food, and settled down even more when we all spent the evening in the spare bedroom playing with toys and having massive cuddles too. That night we decided that as much as she looked like the Felix cat a name change was in order. After much deliberating it was finally decided that we would call her Milly. 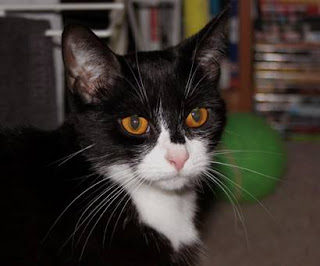 Milly is about 5 years old but when she first came into our care was very underweight and smaller than Mitzie who was 18 months old then. She was soon on the strict Newton-Conroy diet of all you can eat and started putting on weight and looking a lot healthier. Milly wanted all the attention she could get from us and we couldn’t have been happier to give her it, she really was a bundle of joy. At the end of the week we had a phonecall that we weren’t looking forward to from Susie. What we hadn’t expected was that the cattery was to remain closed for another week, and if it was ok with us could we keep looking after Milly for another week? If it was too much there was space in other foster homes now for her. “Don’t be silly Susie, of course we can look after her” and that was that! 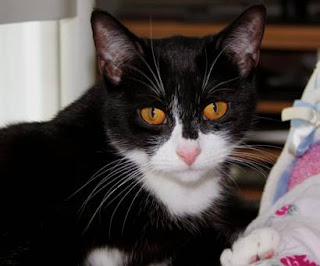 Now Milly had been having some very curious visitors during the first week, no break-ins, just a lot of attention every time the door to the bedroom opened and closed. Once we knew Milly was staying for another week we decided that maybe a few introductions could be made, what’s the saying about curiosity?  After a few hisses and growls (not from Milly) they all seemed to settle down very well. Mitzie seemed glad for another girl in the house, especially as she was no longer the smallest, and the boys were glad of another girl to chase around until their hearts were content! In fact they got on so well that we let Milly escape the second bedroom and roam wherever she wanted. Soon it became obvious that this girl was absolutely adorable, sleeping on the bed between us, following us round the house, coming for cuddles on the sofa. Neither of us wanted this week to end as we knew it would be almost impossible to put her back in the cattery, but with our house full and the opportunity to foster again too good a chance to pass up we would have no choice. 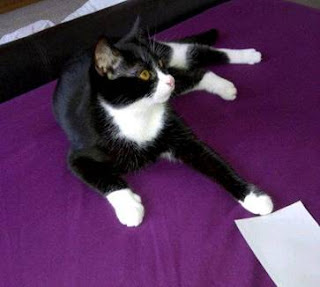 On Thursday 5th April, I took Emma to the airport (bear with me this is relevant) and off she went to Berlin for a long weekend. The cattery was open again and Milly had a space ready for her to go in on Saturday (Emma got back that evening). Saturday came along and I called Susie up asking what needed to be done when I dropped Milly off. Food, water, litter tray, some toys, bedding and a heatpad were what she needed then Susie said something I will never forget. “Chris, I am so so proud of you for doing this, it really is never easy giving up a foster animal” I had to hang up when it struck me that this was going to be the last hour with Milly. I was absolutely distraught and with no Emma to help, I reluctantly scooped Milly into the carrier and off to the cattery we went.

Five minutes down the road and I pulled over, Milly was crying, I was crying and I broke the only rule I had left in my life… Milly was allowed to eat some treats in the car, this settled her down a bit but didn’t help me. By the time I got to the cattery I wanted to go home, I couldn’t bring myself to stay longer than I absolutely had to. I popped Milly in her pen, got all the stuff she needed together and went to give everyone some quick hugs and kisses too. Phone rang again, it was Susie, letting me know again that we had both done a great job with her and that she was surprised that we had been able to take her back. The rest of the phone conversation will forever stay with Susie and me, but in short I cried like a 5 year old girl who dropped an ice-cream for the best part of half an hour. Emma fortunately was in Copenhagen waiting for a connecting flight so I managed to get a call through to her to talk things through. 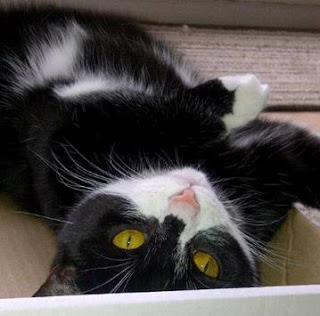 Half an hour later I got home to see Murray, Tigger and Mitzie all sat in the hall looking at me as if to say “Where is our new friend Milly?” I wondered how long they had been sat there waiting for us to come home, I went back to the car to get the rest of my stuff and when I came back in all three of them were so excited. I let Milly out of the carry case and she was immediately greeted with head bumps, licks and purrs from them. Their new friend Milly was now their big sister. 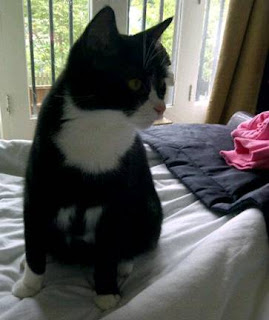 Milly is still an absolute sweetheart, she regularly comes for cuddles on the bed with me and we fall asleep together. She has grown so much and is now a very healthy sized girl and has outgrown Mitzie. An absolute tinker in and around the house, she can open most of the doors even when they are closed and will regularly jump up on the side of the bath whilst it is running, she also always tries to help when changing the bed too! We still get flashbacks to what it must have been like for her before she came into our care, as our resident rascal Tigger chases her she can get very defensive and freeze up in the corner of a room or shooting evil stares with her beautiful eyes at anyone who annoys her too (usually me while I tickle her tummy or side). Naughtily we have come up with a nickname of Scar, as in the evil one in Lion King, which is used when she shoots an evil glance in our direction, but it is nothing a few treats can’t solve! 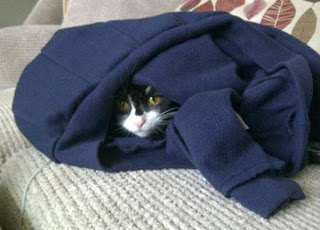 Taking photos of Milly is extremely difficult mainly because she just doesn’t keep still long enough! I will leave you this week with one of our favourite photos of her, for once she wasn’t racing around and it didn’t take 50 attempts to take the photo! 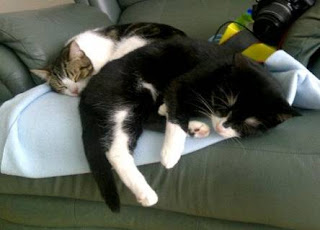