A Happy Tail for Tuesday continued – by Chris & Emma adopters of Murray, Tigger & Mitzie cats, cat cuddlers and cat fosterers!
After failing at our first attempt at fostering, a few weeks later we decided to give it another go, this time with a mum and a single kitten (Jemima and Minnie) who came from a multicat household. 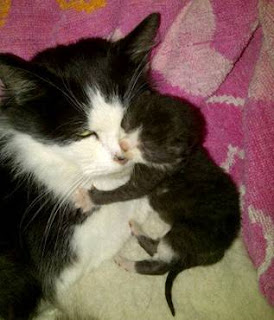 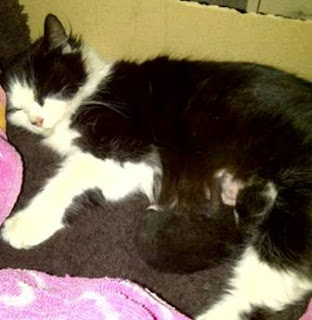 We knew this would be a different challenge to Milly as Jemima was absolutely terrified when she came to us. Both were absolutely riddled with fleas, which we couldn’t treat straight away with mum’s spay wound. It was awful to see them running across little Minnie when she was so helpless. 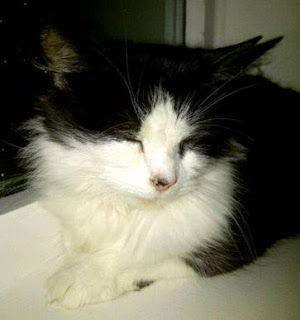 Jemima spent the first few days in hiding, whenever we went in their room she’d be behind the sofa, or desk, she wouldn’t come out at all while we were there, and just hiss at us if we tried to go near her. 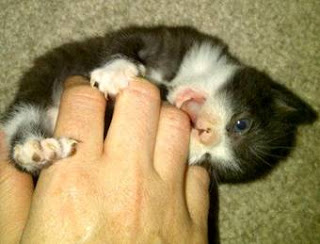 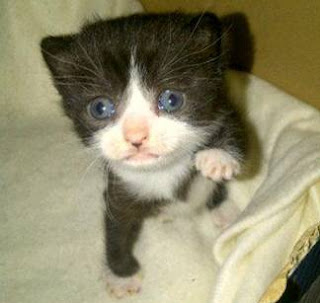 We tried sitting in with her to help her get used to us, but she just didn’t seem to progress. We were also worried she was hiding while we weren’t there and not feeding Minnie enough.
Jemima and Minnie were sadly only with us for a couple of weeks until they went to another foster home. 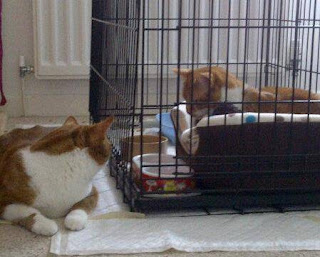 Another couple of weeks passed and Amber bounded in to our lives. Believed to have been in an RTA, she had a fractured pelvis, so was on strict cage rest while she was with us.

The first few nights with us Amber cried the moment we’d leave the room, so those nights I spent on her floor next to her cage, which seemed to calm her down, until, someone else took over “Amber Watch” for me, our own boy Tigger had met his perfect woman. 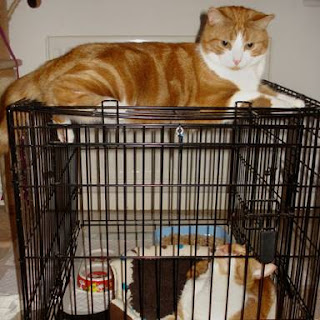 After then, Amber had pretty much zero privacy, Tigger was always at her side.

Amber had many vets trips while she was with us to check how her pelvis was doing, she was unfortunately quite constipated a couple of times as it would’ve hurt her to go. Despite all the trips and the prodding and poking, Amber was so patient. Tigger hated her vets trips and when she returned he’d guard her cage to the max (he hadn’t yet clicked it opened at the side!) 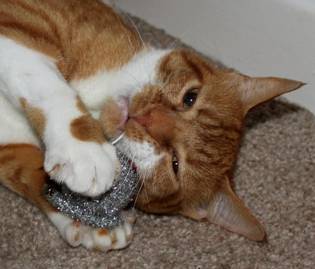 Amber was simply amazing. She was on so many different medications whilst with us, she’d have 2-3 different kinds in her food but would still wolf it down. Eventually, her pelvis healed and she was allowed to play out with us before heading to the cattery for adoption. I found it extremely difficult to let Amber go as I knew Tigger had bonded with her, as I had too, thankfully I have more will power than Chris (Milly!) and Amber now has a lovely home with long stay cat Earl. 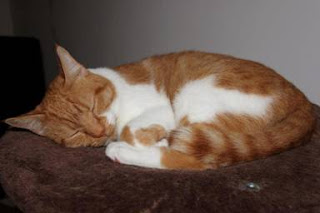 During Amber’s time with us we had another brief foster, Sally, who came to us while the cattery was closed. Believed to have been kicked, Sally had her tail amputated when she came in to the care of the RSPCA, and unfortunately, she still carried the mental scars of this. 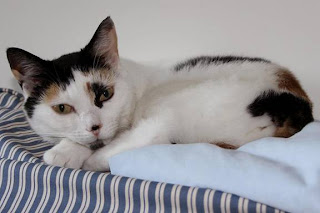 Sally was a beautiful looking girl who could be very affectionate, but due to her past, got frightened very easily, which resulted in her growling/hissing or swiping at you. It was so sad to see this mistrust in humans, I just wished there was a way to tell her she didn’t need to worry and that no-one was going to hurt her.

Sally was only with us until the cattery reopened, where she went for a couple of weeks, but didn’t take too well to her surroundings so ended up back in her original foster home. Not long after then she found herself a lovely home and is now doing much better than I could’ve ever imagined.
Again, in the crossover with having Amber, yet another bunch of fosters took over our spare room, the six P’s, Poppy, Pansy, Purr-C, Patches, Pip and Pablo, all had been abandoned. 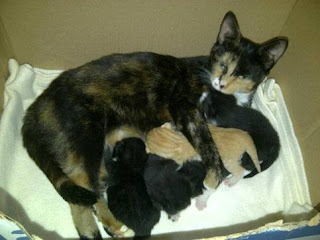 Mum Poppy was absolutely fantastic with her kittens, during the first few weeks we didn’t really need to do anything other than feed her and clean her scratch trays. She was extremely protective over her kittens, not with us, but she could smell our other moggies, so unfortunately, to warn them off she started marking over by the door which at the time was carpeted. At first we thought she wasn’t litter trained, so again, many a night was spent sleeping in their room to move her to the litter tray every time she went by the door. After a couple of weeks of trying everything to stop her doing this, we ended up replacing the patch of carpet with laminate and that seemed to do the trick. 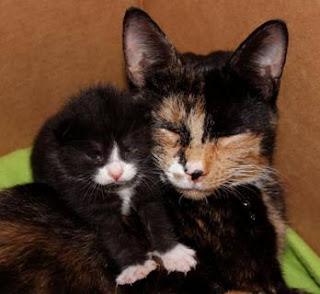 The kittens were roughly a week or two old when they came to us, so at first, they were a doddle, the calm before the storm. However, when they discovered they could climb out of their box and we’d walk in to the room minus a kitten or two, we realised kitten proofing the place must be done! After then, the only places we’d lose a kitten was in the bin, or on a shelf, no problems. 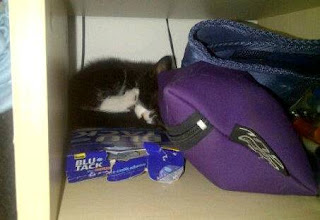 Once Poppy’s little ones had figured they could escape the box along came weaning and litter training them, both of which I’d never really experienced before. Weaning was much more of a challenge than I’d thought, not one of them had any interest in wet food – other than to stand/swim in it – and once Poppy had realised it was food she’d bound over and demolish it, so none left for her kittens to try even if they’d wanted to! Litter training was fun, rather than poop in the litter, the little ones wanted to eat it! Won’t eat food but will eat cat litter… Puppy pads were put down everywhere in the room just in case, but within 5 minutes they were all pulled up in to a pile in the middle of the room and pounced on like it was a new game for them!

By 6 weeks though, all but one of Poppy’s litter were weaned on to biscuits (they still wouldn’t touch wet food for some reason), little Patches just could not get her head round kitten food at all. I was really starting to worry about her and had asked another foster mum for help. Unfortunately, little Patches just preferred mum’s milk! It wasn’t until halfway through the seventh week she finally gave in and had some biscuits, she was on a roll then. 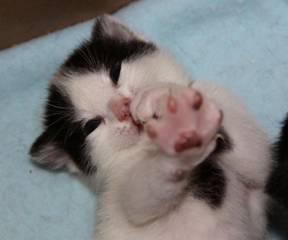 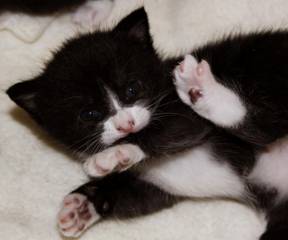 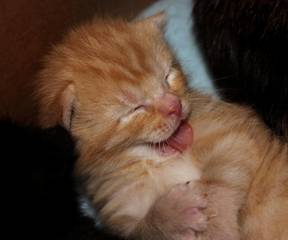 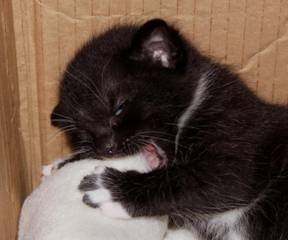 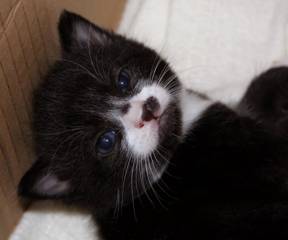 When the kits hit about 5 weeks old, another two P’s joined them, Pippa and Pepper. Both came from a multicat household, so weren’t too fond of the other P’s at first. 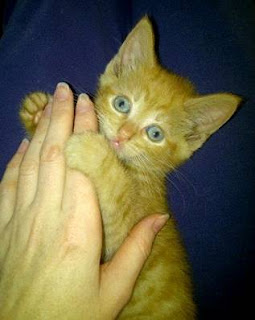 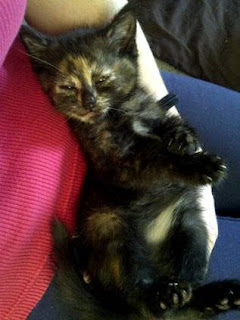 After barely a couple of days, these two settled right in and soon became a part of the mad family. These were already weaned and litter trained so all that was left to do was enjoy them and play with them… the kittens however, had other plans for us. The next few weeks were just a constant clean up job. Biscuit bowls knocked over, scratch trays tipped up all over the floor, water bowls fallen into and splashed everywhere, kitchen rolls (used to wipe their scratch trays) dragged down off the top shelf and torn in to a snow storm, puppy pads raided and shredded, it was just non stop.

I’d never felt so exhausted in my life, my social life became nonexistent, my gym membership was a donation, sleep was minimal, but would I change it? Not a chance!

Giving them up was so difficult and heartbreaking as we’d seen them grow from helpless blind balls of fur to these monsters with an endless amount of energy, but we knew the time would come when we had to give them up so we had to deal with it as best we could – I don’t care what anyone says, crying, does help!
Within days of the 8 P’s leaving us, we had a new mum and kits come to us, the 4 M’s (we’ve been warned, no more kittens with the same initial again!) mum Melody, with Minnie, Maddy and Mickey. They had been abandoned when the kittens were around 3-4 weeks old. 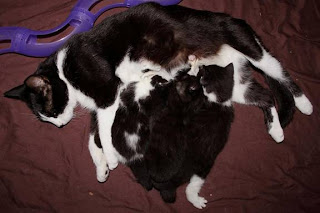 As these were slightly older, weaning wasn’t an issue with them, Mickey would take it or leave it, Maddy was just a biscuit muncher and Minnie pretty much dived head first in to food. 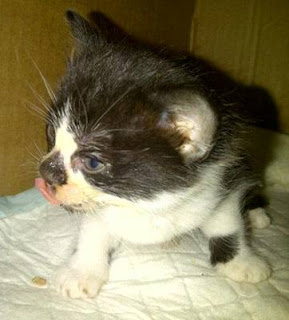 The challenging part with these guys was litter training, as they just wanted to go everywhere the scratch tray wasn’t. So we spent a lot of time with them catching them when they’d crouch down and popping them in the tray, it took a good few weeks of this and accidents before they caught on.

We also thought it’d be easier to cope with the three kittens after having the seven, but they managed to make just as much mess as the previous residents, so no rest for the wicked! 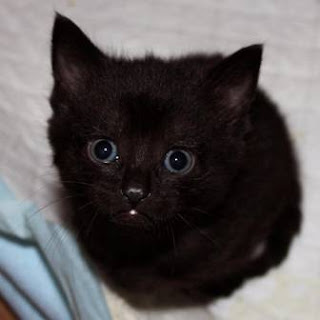 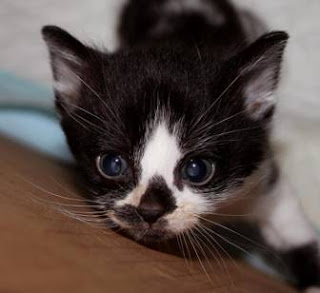 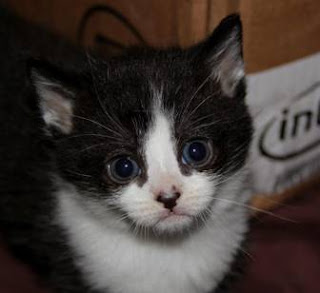 Unlike the 7 P’s who mostly just wanted to play and fight, Melody’s kittens were very affectionate, to the point it was a struggle to clean with them in the room as they’d just climb on you and curl up, even when you were stood up!

Melody was also an incredibly affectionate cat, you’d crouch down to stroke and she’d jump up to meet you halfway.

She was also great with her kittens, but by six weeks of age, the kittens were pretty independent so we were then introduced to her vocal side. So many nights sleep were lost with her meowing to come out of the kittens room, then after 10 minutes of being out, meowing to go back in again. Then the process was repeated right the way through the night. We couldn’t leave the kittens room open as we didn’t know how our own moggies would react to them.
Heartbreak struck again last weekend when Melody and her kittens left us to find their new homes, although we held it together much better this time, but it was still so difficult saying goodbye to them. 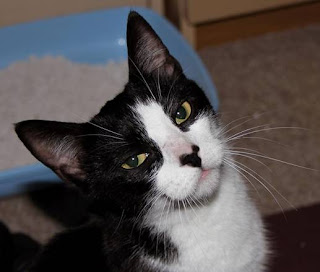 As much as we’d welcome a break to recover fully from Melody’s all night singing, we know another cat or kitten family out there needs us and as it so happens, we’re collecting another five kittens this evening to start the madness all over again.
As tiring, worrying, draining and as heartbreaking as fostering can be, we wouldn’t give it up easily. Seeing kittens develop and injured cats getting well, then moving on to their forever home is incredibly rewarding and makes all those sleepless nights worthwhile.