Just 2 weeks after getting the two boys home we were already thinking of adding to the enjoyment and trying to balance out the boy/girl split in the house. We had seen little Mitzie on the website for well over a week and were completely bemused as to why she hadn’t been adopted. Again showing just how naive I was, when I called to arrange a viewing of her I explained how I thought she would be a calming influence on the boys who were already tearing around the house at all hours. When I said this I could hear Susie’s laugh from the office…

To cut a long story short we went for a viewing the very next day and took her home there and then as we had only had a home visit a month earlier.

Mitzie like the boys was one of three kittens but had ended up on her own when her two brothers were adopted separately. It became obvious fairly soon on that little Mitz was going to be a bit more of a challenge than the two boys when on the way home she let fly with the most almighty trump that a cat has ever done. As it turned out Mitzie poo problems which are common in kittens. It caused endless diarrhoea (not in the scratch tray) and resulted in Mitzie not gaining any weight at all. She was the runt of her little so was only about half the size of Tigger and Murray even though she was two weeks older than them. 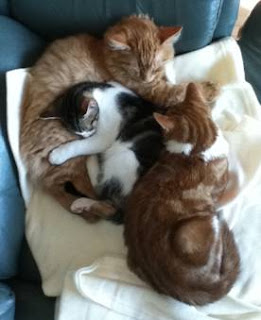 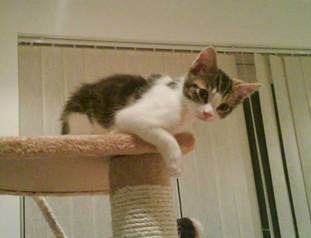 After just a couple of days things got out of control with her tummy and she was taken to our vets around the corner. Unfortunately they were convinced it was dietary problems and after spending a lot of money on sensitivity food with no improvement we, with the help of the Manchester & Salford Branch, took her to Ashleigh Vet Centre in Chorlton to get some samples tested. Without this help we probably wouldn’t still have Mitzie now as I was close to breaking point from finding puddles of poo all round the house. I was impatient and having had no such issues with the boys was completely overwhelmed by these problems. Looking back it was an absolutely horrible thing to think, she had no control over her movements and despite me thinking it she wasn’t doing it to get at me.

After 2 months of treatment we went on our summer holiday to Egypt leaving the kids at our house with Emma’s parents babysitting. While they had had cats all their lives it didn’t stop us worrying about them, and texting everyday to check on them, especially Mitzie with her problems. When we got back we were absolutely stunned, our tiny Mitzie had put on so much weight (thanks to a steroid shot given) and her tummy had completely settled and she has never looked back. 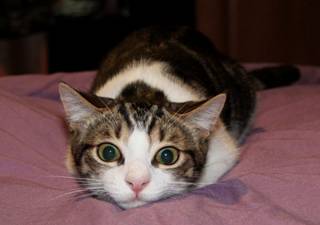 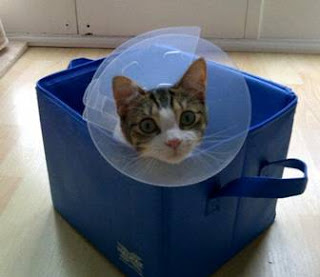 Now Mitzie is a pretty little girl, who has the amazing ability to look like a complete fool at the drop of a hat, we have no idea how she manages it, she just does. 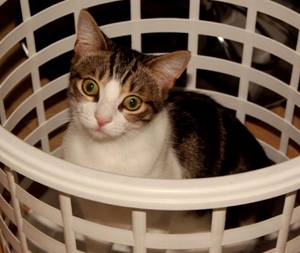 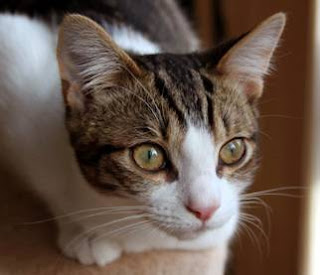 She is also the only cat I have ever seen who plays fetch with socks. This has become more than a game for her, she has her own secret stash of rolled up socks around the house which she will produce for us to play with. It has got to the point where we now have to put our socks on as quickly as possible everyday to make sure Mitzie won’t run off with them! 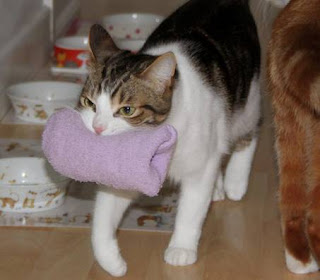 Mitzie really is such a sweetie and I am so glad I was talked into giving her another chance because she brings so much fun to our home, from sleeping on Emma’s pillow almost every night to coming for cuddles constantly to the point where there are days when all I will do is cuddle Mitzie. 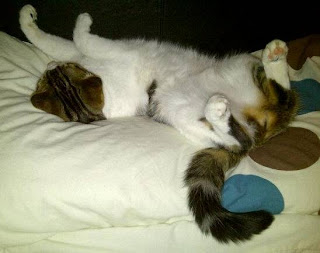 From the off she got on brilliantly with Murray and Tigger, they accepted her straight away, though I suspect that was more to do with having a new playmate than anything else! We continue to drive the 40 mins each way to Ashleigh Vets when she needs her vaccinations and health checks as you can see from this final picture, she absolutely loves car journeys (this is her prior to going in her carrier)! 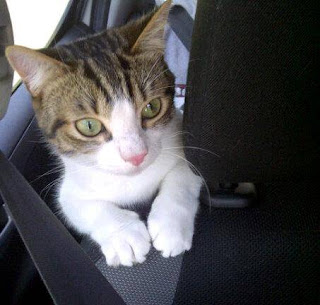 Next time I will skip forward about 6 months and talk about how we both got involved with Cat Cuddling at the cattery and the highs and lows of doing that on a weekly basis…..