A Happy Tail for Tuesday – by Chris & Emma adopters of Murray & Tigger cats!
Early December, 2010, three little ginger boys were found abandoned in a cardboard box on a driveway in Didsbury. Given the cold weather at the time they were extremely lucky to be alive and fortunately for us they were found by a member of the public, who started caring for them before handing them over to the RSPCA hospital. It was there they realised just how hungry the poor boys were and they put down bowls of Cimicat (usually given in syringes), all three boys started rolling around in it which explains the state of their fur in the picture below. 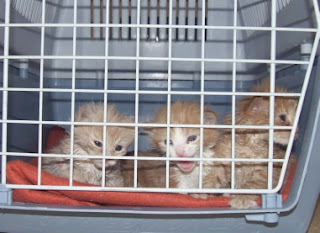 Shortly after they were placed in one of the RSPCA M&S branch’s amazing foster homes, to be hand-reared around the clock until they were old enough to go into their forever homes.

Sadly, poor little Brett became ill for the second time and on Boxing Day the difficult decision was made that he was to make his way to furry heaven.
We first saw Jermaine (now called Tigger) and Murray on the website and the second we saw them wanted to adopt them so, I called and arranged a viewing to get to meet them. I distinctly remember speaking with Susie and her telling me not to worry about Murray as he had lost almost all his fur. This was down to him being a mucky pup and getting milk all over him, and when he was brushed his fur had fallen out. Foolishly thinking it would be a 10 minute thing I arranged it during my partners lunch break on one of my days off. An hour later, and most definitely not wanting to leave without the two boys we called up to reserve them and I then spent an eternity in Sainsbury’s stocking up on food, toys and litter even though we still had the home visit to contend with.

I had never had any cats before (my partner had), so I had drawn up some strict house rules for the two boys to stick to, my partner tried to explain this was pointless as cats have their own rules, but I was determined. They included not being allowed in my bedroom, no climbing curtains, they would have their own food and water bowl and not steal from each other. I had it all planned out and was beyond excited about taking them home. 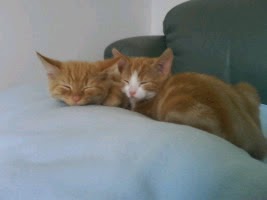 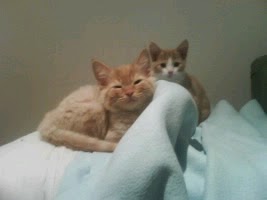 We collected Murray and Tigger on the evening of Sunday 6th February 2011, we soon discovered that Tigger didn’t enjoy car journeys and had to pull over to try and calm him down. When we eventually got back we had so many cuddles and really didn’t want to go to bed that evening. After a day or two of shyness from the boys they soon came out of their shell and my rulebook was thrown out of the window, or more likely eaten by them. Lie-ins became a thing of the past, our feet under the duvet became an endangered species and so did the curtains! A competition started between the boys to see who could sit closest to daddies face while he tries to sleep after a night shift or when he tries to send emails. Toys were played with, bitten, chewed, wrecked and replaced on a regular basis and the boys have grown into absolute monsters now both weighing over 6kg! 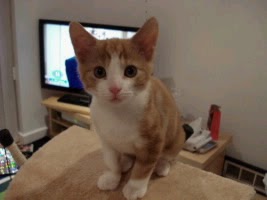 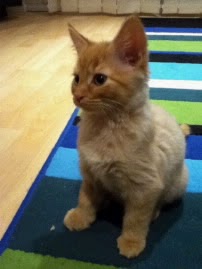 Murray the Lion enjoys eating everything, from chocolate muffins to jelly to stir fry to bread (though he doesn’t like butter…fussy cat) he also enjoys dribbling when having his head scratched, coming for cuddles just as we are trying to go to sleep and making sure we don’t sleep through our alarm so he will be fed. 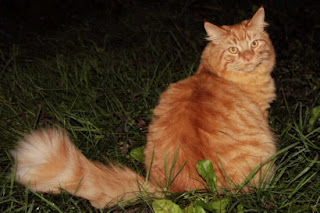 Tiggy Rascal is exactly that, an absolute rascal. If something is “going down” he will be the guilty culprit. He still enjoys attacking our feet in the morning, drinking directly from the kitchen tap, fighting his brother and stealing treats too! That being said Tigger really is a big softie, he purrs non stop when he comes for cuddles and makes the funniest squeaky noises at food time. 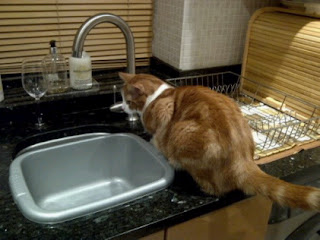 Now I could go on for days about the ups and downs of these two boys, but I don’t want to bore you to death or stop you reading the amazing blogs the RSPCA do. What I shall say is that we have laughed more times than we have cried, been woken up more times than we have had a lie in and most importantly loved them more than I ever thought you could love any animal. If we ever have had a bad day at work we know that these two furrballs are at home waiting to give us all the headbumps and cuddles we need to feel better.

Next week I will talk about what can only be described as an early-mid-life crisis when we decided having two kittens wasn’t hard enough work and adopted another kitten called Mitzie…..