It’s getting hot in here 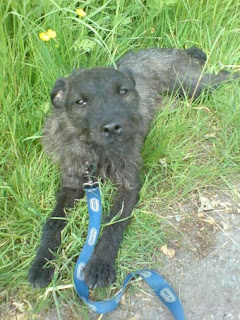 No, I won’t take off all my clothes, don’t worry. Though I cheerfully could, it’s that ‘orrible in my attic office.
It has been another day of calls about Ollie the cavalier king charles spaniel. Despite people being booked in to see him at the weekend they didn’t turn up, which is so frustrating, but there is someone else lined up for him now, I hope.
Sadly the BBC news coverage did not yield much of a response and we have had no reserves on animals over the weekend. Cloud the cat’s home visit didn’t pass either because the road was too busy. So we are little further on, but we have to keep our spirits up.
I am pleased to tell you that another person is going to see our Patterdale dog Sally (pictured) on Saturday. She’s been waiting for a home since Christmas. She and her companion Harry (now rehomed) were found living in a muddy field with just a bare, rough-sawn kennel for shelter. It was the middle of winter when they were found on a traveller camp without any bedding, food or water. Sally deserves a home so much, she needs training, that’s for sure, but she doesn’t deserve to spending her life in kennels. I only hope we find her a home soon. I have to confess to being absolutely smitten with her and think she is a very loveable rogue!
Well, tomorrow will be the last blog for a few days as I will be off on my annual jolly to Glastonbury Festival. With Catherine off as well, Jo will be rushed off her feet so you will have to make do without for a little while. But you can think of me staggering around on 7% pear cider feeling deeply amused with myself and embarrassing my husband as I stomp off to go and watch Will Young, rather than something culturally cool and acceptable!!!!!