I’m supposed to be on holiday. It was the first break I’d had since summer last year but a broken camper van and a dying bunny put leave to that. The whole week has been underpinned by loss for the team, whether it be personal or professional, human or furry. It really hasn’t been the best of weeks, that’s for sure.

Whilst catching up on work emails yesterday I came across one that has troubled me since. It was an appeal from another branch to transfer or swap long stay cats. They were one year old, having been at the centre since they were kittens and continuously over-looked. And why? Because they are black and white. These poor babies had grown up in an animal centre and still hadn’t found their forever home. 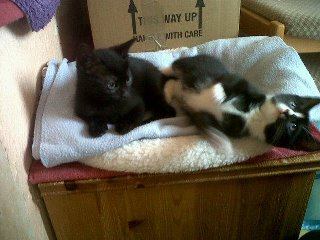 It reminded me of two things. Firstly, the two babies we have in our care called Tasha and Tyler. They’ve been up for adoption for over two weeks and we’ve not had any interest in them. This worries me deeply and makes me fear for their future because as they get bigger, the less interest there is in them. Todd, Aidy and Max kittens perfectly illustrate what I mean. They came into our care at around 10-11 weeks of age. On arrival everyone remarked ‘they aren’t babies’  – the wow, baby-cute factor having gone. If Tyler and Tasha don’t find homes soon their appealing ‘baby’ look will have disappeared and all that people will see is their colour and look elsewhere.

The second thing it reminded me off was Jessica and Ernie. They were hand-reared by one of our foster mum’s but were consistently overlooked because they were ‘cursed’ by being all black – the least desired colour we have found for a cat. They were with us until they were 6 months of age when a lovely lady rang up one day open to suggestions as to who to adopt and I told her all about them. We had found true new friends in their mum and dad because not only did they become supporters but volunteers too and the kitties, well, you can read about them in our success stories section of our website!

But telephone calls like that are rare and so it is with increasing concern that I worry about the future of many of the kittens in our care. At the moment I couldn’t tell you exactly how many kittens we have, but it is in the region of 30 extra mouths to feed. Our seven hand-rears (aka the seven dwarves) are beginning to wean and thank goodness because they were getting through substitute cat milk faster than we could keep up with ordering and buying it! It will only be another 3 weeks or so before they are all looking for homes but with them all being black or black and white their future really isn’t looking certain.

We ran out of adult cat food this week, which in itself is very stressful because we have no budget for food, but it also signifies an additional worry to contend with. Over the last 4 weeks we have seen considerable reduction  in the number of adult cats we have rehomed, but a sharp increase in demand to take more adult cats in.

On Thursday I had a call from the regional co-ordinator asking for help with a total of 15 cats. They were all from different cases that amounted to a total of 15 (it was only the start of the day with many more likely to come in too). We have five of those 15 lined up to squeeze in somewhere, as well as two for foster care (not that we have anywhere for them, yet) and a badly injured pup.

I only hope that when I return to work on Tuesday we have lots of reserves on animals to make it all feel worthwhile.It really does look like we’ll all be having another long and stressful week again but thank goodness for Facebook and Twitter. Believe it or not the two social media sites we have go a long way to raising our spirits. The support we receive via the sites and the updates of our old furry friends means that a pick me up is never far away. We are all truly grateful to our supporters for being there for us and I’m hoping they’ll stick by our side over the coming months as things will only continue to toughen over the summer months.

Roll on my next holiday! 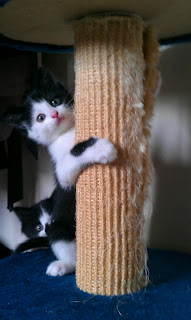