Journey of a life time

This week the national RSPCA issued a press release about the continuing problem we are having with abandoned animals. It’s a tale we know all too well. One of the cases featured in the article really upset me: a rabbit abandoned in a box with a broken back. The suffering that animal went through is unimaginable.

The article stated that the Midlands was particularly troubled with this problem but I can honestly tell you that Greater Manchester is no different. This year we’ve taken in cat after kitten after cat that has been abandoned here, there and everywhere. We’ve just learnt of a case of 20 domestic rabbits abandoned in grassland near Bolton (we’ve regrettably only managed to take in 2 and that’s only because of a kind foster carer).

And when I think I’ve heard all the crazy stories I could, one comes along and bowls me over. This week it was two adorable black and white kittens that were posted through the shutters of a fish and chip shop ‘to get rid’. Why, just why would you even think to do that? We’ve inevitably called them Fish and Chips and apparently they’d been eating the fish in the shop and really stunk of fish when the officer collected them – which rightly or wrongly makes me smile. They are doing well in foster care and will hopefully be up for adoption in the next week. But seriously? Posting kittens?

The closure of the cattery to cat flu has really caused us headaches. We have foster carers doubled up with cats and the office being used daily for pit stops,but it looks like we’ve got a good couple of weeks before we’ll be clear of it. All the while the numbers being rescued is not abating. There is nowhere for cats to go at this present time and I know local animal shelters are full too. I really don’t think I have ever known a summer so bad before and the theory is that the recession, or whatever you want to call it, is only just kicking in for the general populace now.

I’m trying hard not to take it all on board but I get waves of worry that send me reeling, like with 20 rabbits abandoned in Bolton. I tell you, the feeling of impotence runs so high and I just wish we could do more, but then I remind myself that we are close to double over capacity and that’s without the benefit of our own animal shelter.

It has, however, been a week of highlights. We’ve had lots of fantastic updates on the collie cross puppies – all of whom are clearly well loved and growing up to be smashing companions. They were all such fantastic natured puppies and so it’s an absolute pleasure to hear how well loved they are by their adopters. 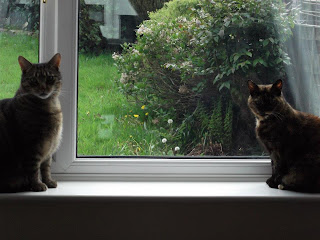 Another highlight  was an email about brother and sister, Johnny and Betty, pictured above. I did their home visit last December. They’d been with us a while, largely because pairs of adult cats are much harder to home (like our Earl and Enzo who have had absolutely no interested in them). Betty was quite an aloof character but Johnny incredibly affectionate. So, it was to my utter delight, that the email shared stories of Jenny having transformed into an affectionate, playful and loving cat. That’s what I love so much about rescue animals, the reward of taking them in and watching them blossom over time is just immeasurable.

I have been experiencing the same with two foster rabbits Grace and Claude (I bore everyone about Claude so I won’t go on this time!). Grace started out as a petrified, flighty and fearful rabbit and now, after 4 months, she begs for attention and food. She goes flat for a fuss and has quite the cheeky streak in her. The day she first took food out of my hand felt like I had won the jackpot. It had taken 3 months for her to develop that trust and since then our relationship has gone from strength to strength. The joy of achieving such progress is just the best feeling. Giving a rescue animal the opportunity to grow in confidence, strength and character to be who they want to be is by far the best experience in the world – you ask anyone who has ever taken in a rescued animal.

But finding Grace a home will prove difficult. I suspect she won’t be easily paired with a mate, due to her past experiences, and there just aren’t many homes for a single house bun. It’s such a shame but she’s not alone, we’ve got others who also are proving impossible to rehome all because of the ill treatment they’ve received from humans.

But whenever we have a dark day and despair at the world at large, along comes another email update that sets your heart singing once more. 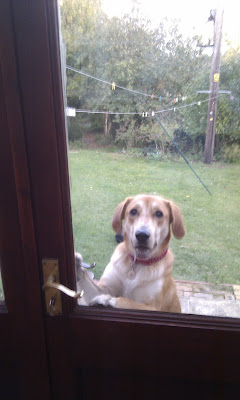 Zak was adopted from us over a year ago. He was a firm favourite for his good looks, loving nature and liveliness. But he was also the sort of dog that could potentially prove to be a handful once settled in a home with his paws firmly under the table!

But Zak has taken his ‘parents’ on a journey of discovery and development that they would not have missed for the world. He has made their lives complete and brought them so much love and joy (‘joy’ really is the best way to describe that feeling).

What I love about this photo of Zak is that it encapsulates everything I mean about enabling a rescue animal to ‘grow in confidence, strength and character to be who they want to be’. Despite not having lever door handles in their home, Zak mastered opening them at his ‘grandparent’s’ home in no time.

Now take a good look at his cheeky face – doesn’t it speak volumes? That look is why each and everyone of the team does what they do, whether they are voluntary or paid, it’s the reason we are all so passionate about rehabilitating and rehoming rescue animals.

All animals are amazing, but rescued ones are remarkable; their capacity to love, learn, trust, forgive and forget never ceases to astound me. Adopting a rescue animal means you take a journey of a life-time that brings rewards that you can cherish forever.