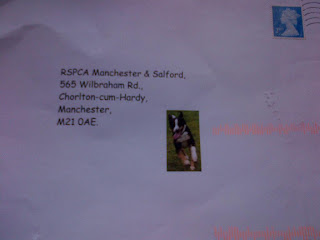 When this envelope came through the post this week I knew that Christmas had arrived. It’s hard to feel festive sometimes with the work that we do, but this envelope signified something very special to Catherine and I.

For the last 5 Christmas’ we’ve been lucky enough to receive the generous support of a lovely man named Graham. He adopted a very special dog from us called Charlie, a dog that we were all very attached to. Graham’s annual support shows to us that he never ceases to forget our fondness of Charlie and the work that we do. Hearing from the two of them each year does something for me that is really reassuring. It somehow makes me feel like everything will work out in the end and that everything we do really is worthwhile. It’s hard to keep this perspective most of the time but the reminder that animals are living long and happy lives with their families does just that.

It has been yet another challenging week with loss, admissions, adoptions and of course the new shop. Of the 2 dogs, 5 rabbits and 7 cats that have been admitted over the last week 12 of them have been abandoned. I fear things will get worse over the next few weeks and what bothers me more than anything is that we still, in this day and age, get calls from people wanting to ‘buy’ animals to give as Christmas presents. It’s so obvious why this is such a bad idea that is doesn’t warrant commentary. It saddens me so much that people think that this acceptable and that they think an animal can cope with the expectations that will be placed on them as a result of being a gift.

Most of the animals we’ve admitted have been abandoned in boxes and carriers in all manner of places: doorsteps, alleys, remote areas.Walter, a new ginger and white cat, was one such victim. He’s taken his ordeal hard and hasn’t come out of his bed much since arriving. I know in time he’ll come round but the uncertainty he is evidently experiencing is so sad to see, especially now that he is somewhere quiet, safe and warm. There really is no place like home.

Thankfully our supporters have been helping make our animals lives more comfortable this Christmas with donations from our Amazon Wish List. It has been a joy to watch the animals play with their new toys. Jack and Carson, our longest stay cats (they’re black, that’s all), went wild for the catnip toys yesterday and Little Bo was mesmerised by his dangle toy. Take a look at him playing with it here; it just shows what a difference you can make to animal’s lives. It’s also the reason why we have set up our own Ebay Pet Store so we can raise funds for the animals and offer you great products at discounted prices. We’ve started off with a select range to test the waters but please take a look at our site. You can buy the items for our animals if you like, just make sure you let us know when you place the order.

Whilst many of our animals won’t be lucky enough to find homes for Christmas there is one thing for sure, there isn’t a shortage of love and care for them from everyone, which is something I will never, ever take for granted. It’s also the reason why we started running the Rescue Animal of the Year awards a couple of years ago. The idea behind it was to remember the many special animals that have touched our lives, reflect on our achievements and demonstrate just how important our work is. This year is proving as hard as ever to shortlist the animals but this coming week we’ll be releasing the finalist for everyone to vote on via Facebook. There is stiff competition, but so there should be! It’s hard to believe it but this year we will have rehomed a hundred more animals than in 2011. For some reason we appear to be bucking the trend with our adoption and admission figures, but you’ll get no complaints from me; I’m utterly thrilled at the number of animals we will have helped; it makes all the long days and hard work all the more rewarding.

One animal that won’t feature in the shortlist is Blue. If it were up to me he would be the outright winner, but we’ve kind of kept him under the radar for a while because of what he’s been through. 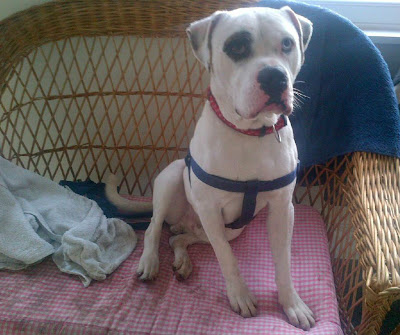 To say I love Blue is an understatement; I want the moon on a stick for him. I want him to find a home that will give him everything that he needs, but finding a home may never happen. You see Blue is an American Bulldog. There’s a lot of prejudice surrounding this large breed and with Blue’s history I know he’s got a lot going against him, but believe me when I say he’s very special.

Blue’s former owner was witnessed by several people to violently attack him on a number of occasions. Blue has scarring all down his back as a result, but this really is the only trace of his past life. I accidentally tripped over him the other day and he ended up getting a small kick in the process, yet he didn’t even react. It just shows how trusting animals can be with you once they know you.

The last attack Blue endured was brutal. He was repeatedly hit on the head with a hammer. He was abandoned soon after on a 16 year old boy and left dazed, confused and fitting. An RSPCA inspector attended the scene and took Blue straight to the vets. The inspector has photos of Blue whilst at the vets in a bloody, swollen, pitiful mess but I don’t ever want to see those photos because he deserves more than to be remembered as ‘damaged goods’. It was hoped that the photos could be used in evidence against the perpetrator, but sadly none of the witnesses felt able to go on record,so justice could never be sought for him.

Thankfully Blue had made a full recovery prior to coming into our care (he was at another centre before coming to us). We’ve had him nearly two months now and he’s not shown any signs of ill health. He officially went up for adoption this week after careful, considered assessment of him and spending the time working on clicker training with him.Blue absolutely excels at it and will do anything for food; he really has been a star pupil and will now walk to heal and is a well behaved gent and sits politely. 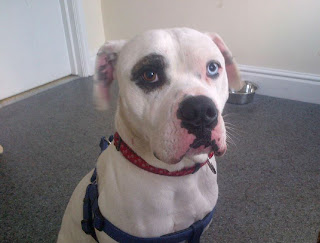 What is so wonderful about Blue is how much he enjoys being with people. He makes friends with everyone and everyone falls for him in an instant. I call him ‘snuffly truffle man’ because he just loves picking up a scent and following it; he’s so much like a hound dog sometimes. Blue is going to need a special home though because it is clear that he has been encouraged to be reactive towards other dogs. He was obviously once used as some kind of twisted status symbol of threat and aggression, which is totally ridiculous given just how loving he is and so eager to please. The more time I spend with Blue the more I fall in love with him. I really hope we can find him a home, but I won’t pin too much hope on it happening any time soon.

If you would like to help support our work we need more than just money. You can donate/buy a pet product via the Ebay Store link or visit the Amazon Wish List link above or you can help us fill our new shop with donations. We can collect donations of a sizable amount so please just call the office on 0161 882 0680 and leave us a message
.