We learnt that Wayne chose our branch because of working in the area and being a life-long animal lover and committed vegan. Wayne has been training hard over the last few months but in the run up to today he has been plagued by injured. Two weeks ago it was looking like he was going to have to pull out due to troubles with his knee. But Wayne has been undeterred and he is stood, as I type, at the starting line of the London Marathon. 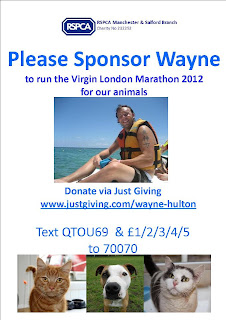 We are asking everyone to show their support for Wayne and our animals by text giving or donating on line today.   wayne hulton is fundraising for RSPCA Manchester and Salford