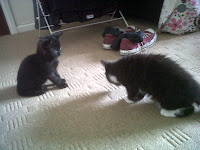 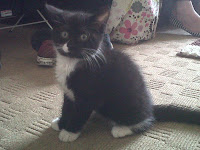 I can’t honestly say how I’m feeling this week. Perplexed is too strong, bewildered untrue and ambivalent a bit closer to the truth.

First thing Monday morning Hetty the bunny was looking distinctly slender, which could mean only one thing – she had finally given birth. I didn’t want to disturb the nest but a quick glance suggested there were 6 babies. The exhilartion of the babies was huge, but within moments reality struck me – there would be bouncing baby bunny buggars within 3 weeks, pooing all over the house! Despite my reservations I was confident we had a good start to the week.

Monday was also our AGM. A necessary evil that always takes far more work than should be necessary and one I always have a sense of disdain towards. But it was all set up for us to have a quorate meeting and a strong turn out and thankfully it all went well. But before the meeting I was at the vets with our 3 new bunnies, 2 guinea pigs and one of my own, Megan.

I thought one of the new bnnies was going to be put to sleep because he looked such a mess, and I also feared the worse for the pork boys cos they were so underweight – but thankfully they checked out well and I managed to find them foster homes so they could get the extra tlc they needed. But then came the shock…my bunny girl, who had not been right for a week, was the one to be put to sleep.

The week before I had spent the weekend nursing her and on the Monday before taken her to the vets but nothing showed up on examination or screeing. Megan had been abandoned in a terrible state last September and I had spent a long while nursing her through uterine cancer. So much so there was no way I could give her up for rehoming and she became the girlfriend of my big fella Biggun and my beloved little girl. But 6 months later, and within little over a week, a rapid growing secondary tumour had appeared, and so this Monday at the vets the growth was found and I had to face up to making an unexpected and sudden decision.

Once again I was feeling huge resentment towards my job, as all I wanted to do was go home and grieve for my beauiful girl, but I had no choice but to go back to work and stay late to hold the AGM. It’s times like these that I feel quite angry that I have to give so much to this job. I was really cross that everyone ran off home as soon as it was over and I had just my usual stalwart friends to help me pack up. But my anger abated a day or so later after I allowed myself the time to come to terms with my loss. But it just seemed like a cruel irony that on the same day a nest full of bunny babies arrived, my beautiful girl had to leave.

The rest of the week saw the arrival of two new cats – one that remains desperately ill at the vets following a nasty RTA. The hope is that Steve the cat will regain the function to wee and poo, but by Friday things weren’t looking great. He had suffered 3 fractures to his pelvis and a completely snapped off tail, which, if he makes it, will have to be completely removed. What saddened me so much was that he is barely 8 months old. To see him in pain but so keen to be loved was so sad. I’ll know tomorrow if we have to let him go, let’s hope it isn’t another crap start to the week.

Then there was the other new admission, Cole, who is nothing short of bonkers. He was found roaming around the Premier Inn at the Trafford Centre and was brought into our care with an injured tail. The tip has had to be remoed but is seems that Cole could be responsible for the injury as he keeps attacking his tail. His wonderful foster mum has been doing research into this phenomonem and it could well be that he is attacking it out of stress or from some condition she has unearthed. I’ve watched him and it’s a bit like he doesn’t believe the tail belongs to him. So strange and bizarre, so he fits in perfectly well with rest of our animals and staff!

Catherine was off sick for two days this week, and bless her, she kept wanting to try and come in and I had to bully her to stay at home. I ran into her boyfriend and he told me she just loves her job so much and didn’t want to let anyone down. Loyalty and dedication like that is so rare, and I think the world of her, and thankfully she is feeling better again but I can tell you – I hate driving around doing loads of the animal jobs because other people are such crap drivers. Catherine is away for the nearly three weeks after the bank holiday and I’m dreading loosing her, then I’m away after that and she’s dreading loosing me. Oh blimey.

Best news of the week is defiitely the departure of Prince the dog. He left us on Saturday to go to his new home after waiting for one for 8 months. Sometimes I can kind of understand why some of animals get overlooked, especially the rabbits, but with Prince it always remained such a mystery to us all. I hope to goodness he is behaving himself along with Maggie, Jacob,Robbie and Tom – all cats that have gone to new homes this weekend as well as Ronny the rabbit who was dumped in a children’s playground.

I think we are especially chuffed about Tom though because he was our first FIV+ cat and he got snapped up within a week of coming in. So chuffed and feel like it’s a huge up yours to all thsoe people who insist FIV+ cats should be pts.

Our week ended on another high – our community pet health clinic in Wythenshawe went really well. We had 101 animals turn up, including a dalmation, I kid you not! So I’m going to have to do a press release with some kind of cheesey headline along those lines.

The vets reported seeing a variety of conditions and complaints that will hopefully result in follow up treatment being sought and us, ultimately having alleviated animal suffering. Some of the things seen/diagnosed/suspected included: a rare skin complaint, granulosing of wounds from flea dermatitis, hyperthyroid, hernias, an emaciated and worm filled puppy, extreme obesity in a rabbit who really should have had flystrike in this weather and given how soiled she was, another rabbit that needed to be put to sleep, another rabbit that was badly matted, dog after dog that was not neutered, kittens by the bucket load and of course, lots of staffies!

It sounds all doom and gloom but it really was an uplifting day because we really made a dfference, and some animals got to see a vet that they may otherwise might not have done. I have to plan for our next pet health clnic in August, but time is fighting against me, but I’ll get there. In the meantime I’m looking forward to greeting 3 new cat arrivals on Monday who are coming in from the Macclesfield Branch.

The inspectorate in Macclesfield removed 41 cats from one home and the branch took them all in and have managed to rehabilitate them all. I got a speculative call on Thursday from the branch and I seemed to make their day when I said we’d have 3. I said we would take anyone, and it’s quite excitng not knowing what you are going to get – it’s like a lucky dip! And of course we should also be able to take in a new dog too.

On Saturday Floyd, Angel and Olive were resevred and Duke the dog’s home visit passed too. So I’m going to be greedy and hope for some more reserves today but will leave you with these gorgeous pictures of little kitten Oscar meeting his new playmate Lucky for the first time. Isn’t Lucky beautiful. Want!