I can honestly say I don’t think I have been this tired in such a long time. It’s nearly midnight as I begin to type and I’m nursing a very sickly 6 (nearly 7) week old puppy. She and her siblings have been with us since they were 10 days old and we’ve been caring for them round the clock since 29th December. It has very much been a team effort but the night shifts usually fall on my husband to do, but with him being at work on  night shifts at the moment it’s my turn to step up!

The puppies were rescued by an inspector after their mother rejected them. Sadly not all of the litter survived, but out of the 4 we took in (2 passed away before we got them) 3 have made it through. Except now they are ailing with respiratory infections and I have to say I’ve not felt this helpless since the last time a bunny went into gut stasis.

It’s been truly a blessing watching and raising these babies. I thought I’d never do it, but a moment of blackmail saw me succumb and I’m so glad that I did. It does, however, mean that myself and Deb have an almighty attachment to them all and it is the reason why I will soon be signing on the dotted line to adopt my my first ever dog, who is lovingly, and stupidly, named Dagnabbit (by my husband). 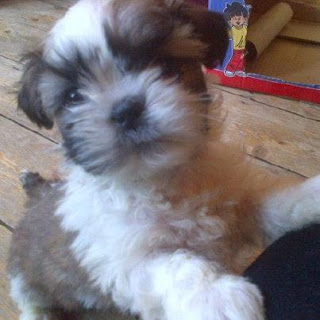 Having the puppies has taught me so much, not just in terms of canine development, but how precious and valuable life is and what a privileged position us humans are in. It was no more shown in stark contrast this week than when I was at the vets, in a consult room, hearing a client in the reception area repeatedly screaming at his young dog to ‘shut up’. His ignorance and aggression was startling. He had no idea that every time he acknowledged his dog’s barking that he was quite simply reinforcing the behaviour. But it was his ferocity that perhaps upset me the most because it was as if he begrudged having the animal in his care. Who knows, maybe he did but all I could really see was a dog with behavioural problems in the making.

I sit here quietly contemplating the suffering that so many animals go through, deliberate or otherwise, at the hands of humans. It’s something you can’t afford to do very often because truly thinking about it becomes too hard to contend with. Instead we channel our energies into making things better for the animals and finding them new homes but sometimes, despite all our efforts, we don’t manage to do this and it’s then that we consider how much we have failed them – as individuals, as an organisation and as a society .

There has been continued media misrepresentation of the work of the RSPCA this week. One quoted the RSPCA as euthanasing 53,000 animals a year. To the uninitiated this must sound horrendous, and certainly serves to fuel opposition towards the charity. But the reality is that 75% of the euthanasias were of injured or ill wildlife, where ending suffering is the kindest and most humane option because they are wild animals. The remaining 25% is domestic animals but in the vast majority they were seriously ill and suffering.

Take for example a beautiful young cat that was rescued by inspectors after being found by a member of the public being attacked by dogs. Outwardly he suffered no puncture wounds, just severe (and I mean severe) bruising. We were all set to take the cat in but when seemingly well enough to be neutered it was discovered that internally there was extensive tissue damaged that had begun necrotising. This may sound an extreme example but this what the RSPCA deals with on a daily basis and a typical example of what has to be euthanized to end an animal’s suffering. Surely no-one can really take issue with this?

Perhaps the one area that I agree is contentious, and emotive, is euthanasia on behavioural grounds. As the Branch Manager I am responsible for all such decisions. It is nothing short of horrible ending an animal’s life for these reasons and it leaves me feeling angry and resentful.

I’m struck by how difficult,and easy, it is to extinguish life and how avoidable it could always have been. So rare is a behavioural problem genetic, it is nearly always man-made.When I began my career in animal care some years ago I never thought I’d be putting to sleep animals on non-medical grounds. I don’t think anyone that goes into this line of work considering the likelihood of euthanizing animals on anything other than medical grounds. So, to indirectly suggest that we perform such acts as a matter of routine, and without forethought or care, is little more than an insult to the hundreds of us who work tirelessly, day-in day-out to do all we can for the animals we rescue.

The next time you read a derogatory story about the RSPCA please take a minute to question what is printed. Come and ask what the truth is and we’ll be sure to tell you. The fact is we are an army of individuals working together as a team, going above and beyond each and every day and night doing all we humanly can to help animals. Just remember that when you are tucked up in bed at night they’ll be an inspector out on their own rescuing geese, they’ll be veterinary staff performing emergency surgery and animal carers hand-rearing babies. Thank goodness for the RSPCA.