On the Look Out

We’ve all seen the shocking images of long-haired animals RSPCA inspectors have rescued in appalling conditions, so badly matted that you can’t even discern their breed.
Well Teddy is a ten year old Lhasa Apso who was taken from his owners after he too was left to deteriorate into an upsetting state of neglect. Teddy was so terribly matted that he couldn’t even see out, he struggled to walk and he was a pitiful, confused old man. Over the years I’ve seen some sights and inevitably become better equipped to cope with the sadness of our work, but I’m not ashamed to admit that Teddy made me cry. I wanted to do all I could to give him a chance but we could not keep him in a kennel. He whined like an injured seal pup and could barely walk. It was heart breaking to see the state he was in and euthanasia really did seem like the kindest option.
But I was thrown a lifeline by two wonderful people who offered to foster him, even though they knew he may not have a future. Below they chart their journey with Teddy. His foster parents are testament to what amazing kindness there is in this world. It is no doubt thanks to their love that I can share this blog today.
“On arrival Teddy was a very weak and vulnerable old guy. He had very little sight and seemed to have no hearing at all and was very weak on his hind quarters. He would pace around for hours bumping into things crying and howling in quite a haunting and upsetting tone. Until he was confined to one room this would not stop and he wouldn’t settle. He didn’t eat very much at all for the first three or four days and seemed to dislike his face touching the side of his food bowl, so we had to scatter food on the floor initially. We would try to console him but sat quite rigid at an arm’s length distance away from us. When taking him outside into the garden we firstly carried him, then showed him around the garden on a lead, as he would fall over every stone, step, bush, anything. He would walk into everything, getting quite frustrated and upset with himself.
After approximately five days he started to eat more and used his food bowl. He stopped crying and pacing, so started to spend more time with us around the whole of the downstairs of our house. We stopped carrying him to the garden and just lead him through the house by his leash. Letting him off leash once in the garden, where he still bumped into various things but would toilet as soon as he felt the grass under his feet. We noticed him hearing one of our dogs barking, although she is very loud! We also noticed he could make out maybe the outline of our legs and would follow us but still bumped into flat surfaces, i.e.: walls , garage doors so he constantly needed a chaperone.
Approximately ten days after arriving at our home there was remarkable improvement in Teddy. He now responded to his name, knew his way around the house, both gardens, front and back: not bumping into anything at all. He knows exactly where every obstacle is now and even goes and cries at either the front or back door to go out to the toilet.
Teddy now also begs for his food – that’s 5pm on the dot by the way! He lifts his head when you call his name and races you to the front door when visitors ring the bell and even barks at a knock on the door.
Teddy loves his tummy being tickled and likes you to grab his whiskers so he can play bite you. He loves you to tap his bum and does a little skip then looks back at you to do it again. He even jumps on the sofa now and will sit there all night with you having his belly tickled. All in all he’s enjoying life: his eye sight seems to have improved, is hearing is better and he is so much stronger on his back legs now and you can’t stop him jumping on the sofa. We have found him to be a very pleasant old fella who loves to spend time with us, especially in the afternoons after his morning nap and will make a wonderful companion for someone at home during the day.” 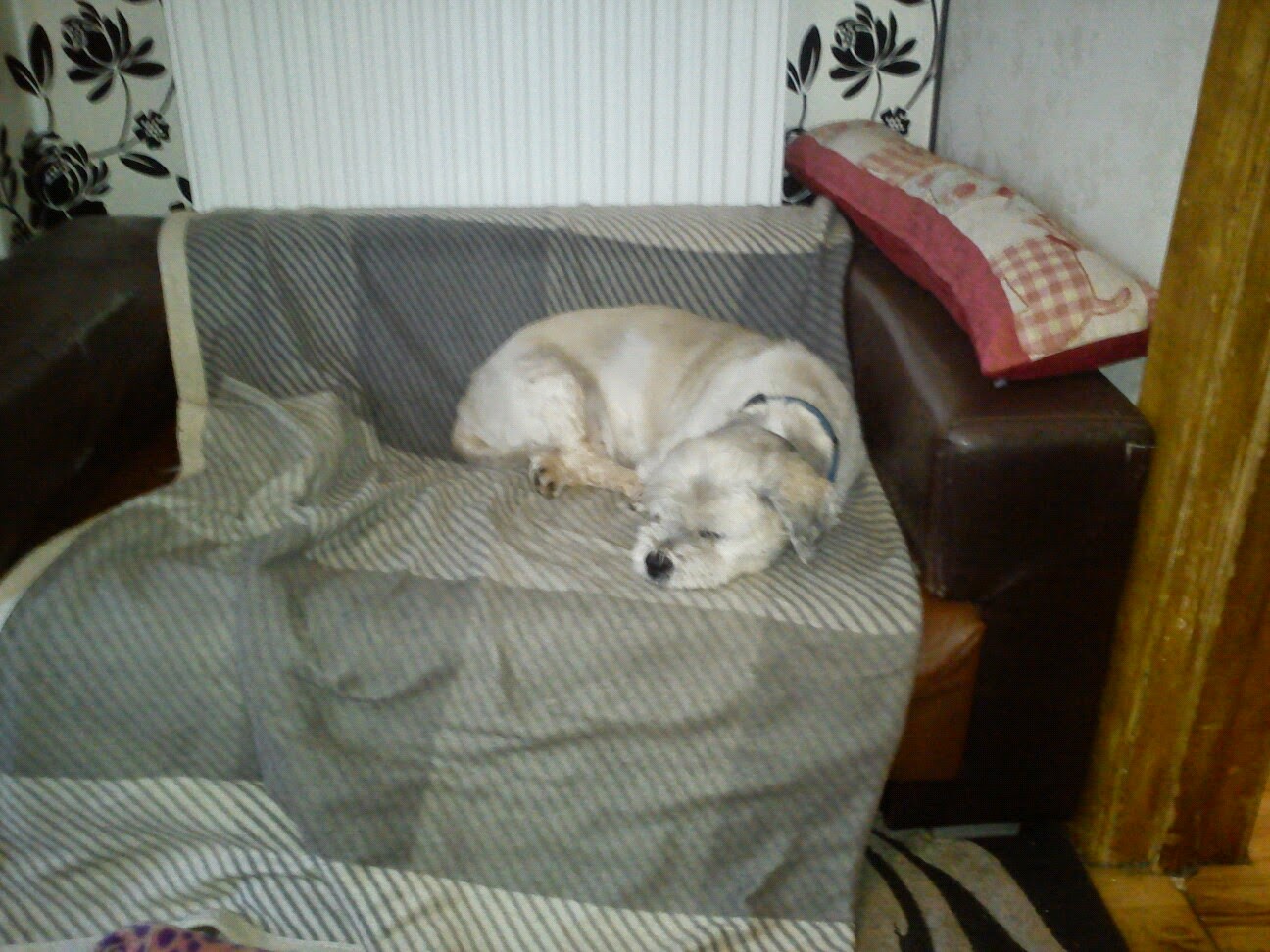 After veterinary investigations to ascertain a full picture of Teddy’s health we are delighted to announce that he is able to be rehomed. Teddy has a condition called ‘dry eye’ and will require ‘viscose tears’ eye drops putting in his eyes at least 4 to 6 times a day. The eye drops only cost £3 a bottle. Teddy was born with poorly formed hips and as such he now has ‘severe arthritis’ but has learnt to cope with his impairment. He will benefit from anti-inflammatory drugs, which any prospective adopter must be able to pay for. Otherwise, Teddy is in remarkable condition with blood tests revealing his in good health; he just has the odd old dog lumps, but nothing sinister.
Teddy will need an owner who can afford his medication, is at home most of the day and has the patience and understanding to help him settle in and learn his new home. It is not essentially that you have experience of dogs with hearing or sight impairment but it is essential that you have commonsense and patience. Teddy has been happily living alongside his foster family’s placid, good natured dogs. He could not cope with boisterous dogs or younger children. And remember, he likes his tea at 5pm on the dot (he’s a bit more flexible about breakfast time!). 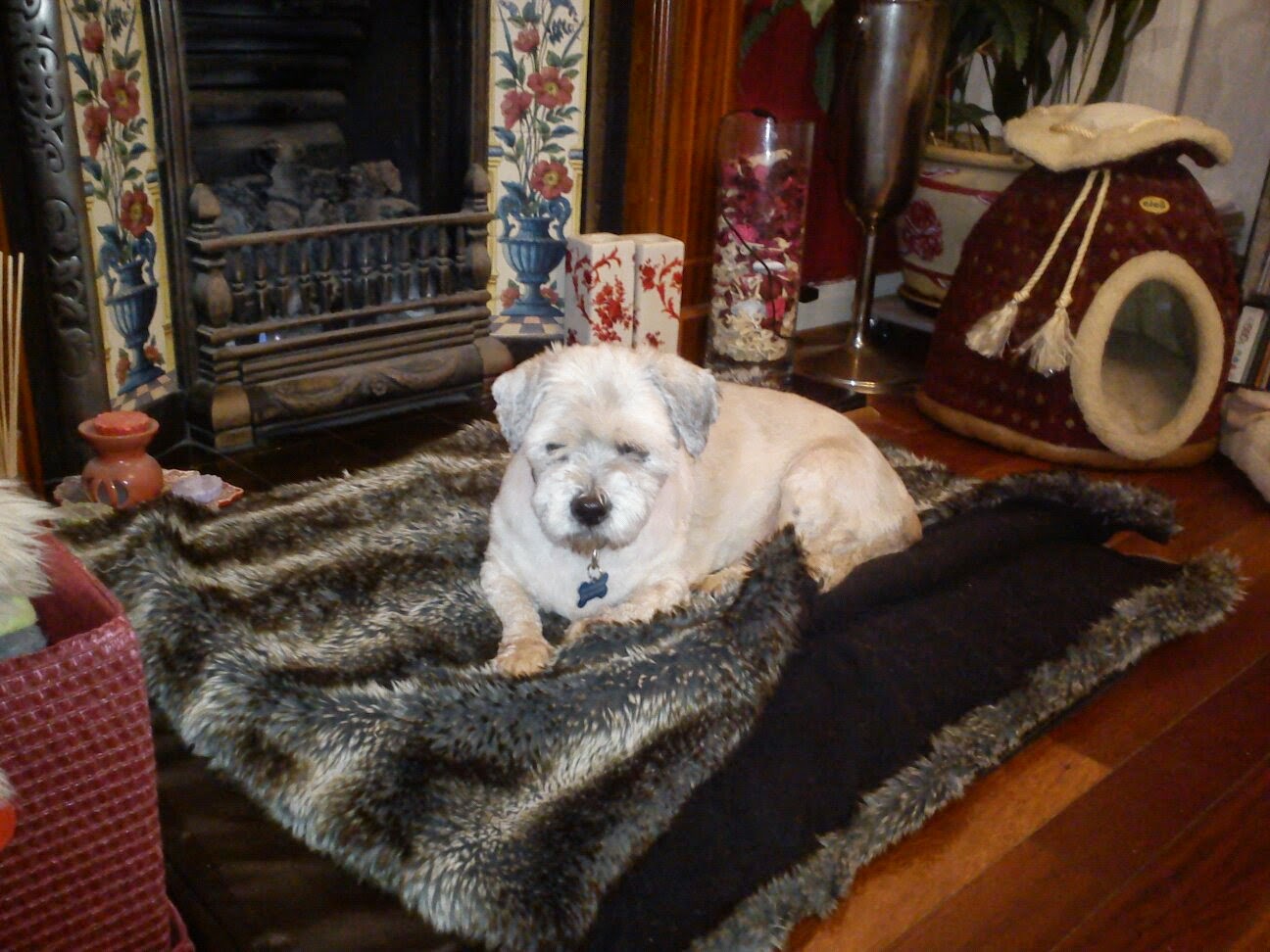 Teddy still makes me well up with tears each time I look at him, even just at his photos. He has come such a long way in such a short time. We have had him approximately 3 weeks now and we would love nothing more than to find him a home for Christmas.
Teddy is such a special little dog, with a gentle but spirited nature. Teddy is the reason why I do this job and why I will forever be a supporter of the RSPCA.
If you can offer Teddy a home please call 0161 882 0680.