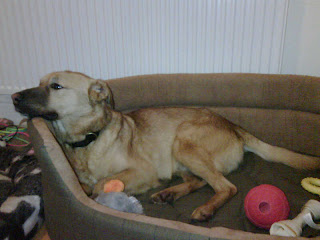 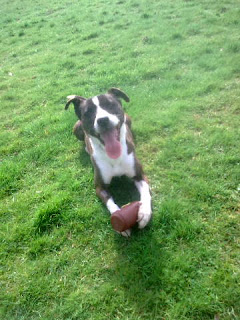 I am pleased to say that this week has been peaceful – no traumas, no stress, just peaceful. In fact, at one point, whilst stuffing 200 envelopes with calling notices for our AGM, I actually found myself bored. Bliss, frankly. So I opened a tin of chocolate biscuits I’d saved since Christmas and wolfed down loads. Bliss.
This week has seen two of our dreams come true. Our gorgeous dog Sailor went to his new home yesterday. We’ve had Sailor since October last year. The inspector who removed him from a property in Moss Side is still pursuing a case against his former owner for failure to meet his needs. The former owner keeps sending in sick notes to say she is not fit to attend court, but we won’t give up until we have sought justice.
Sailor had always found the kennels hard to cope with but of late it had taken it’s toll and he’d begun loosing weight. With only having two dog foster carers (one with Hank and the other for puppies) we were worried about how to help him. Bulking his food out with pasta saw his weight increase but it wasn’t helping him psychologically.
But then, last week, we got an email from a local lady wanting an active dog to go running with. Sailor was the perfect choice! After a week of visits and careful deciding Sailor went home on trial for the weekend yesterday. Catherine said he just laid down all calm in the back of the car, as good as gold and seemingly very content. And last night we received the fab picture of him in his new bed and the update that he had been on 3 walks, visited the pub and frightened their cats! How happy does he look in his king sized bed? Stuff of magic that is, so let’s hope he doesn’t disgrace himself and get returned.
The other magic news is that we have found a home for Aslan with a lovely local family. On a second visit this week the children were introduced. We feared he would jump up, be too giddy and maraud, but OMG, we couldn’t believe our eyes! Aslan went bounding up to them but as soon as he reached their proximity he stopped himself, with a cartoon-like jolt, and just sat himself down in front of them, all smart and attentive and respectful like. From there on in he remained aware of the children’s size and stature and was just amazing. I would not have believed it had I not seen it for myself and he really sold himself.
So, next Wednesday, after he has been neutered, he is going to his new home, again on trial, because he has never lived in a home before, probably not house trained and definitely not lead trained – so it’s a lot to take on so we are letting him be trialled. But having met the family they will give it their absolute all. So please keep everything crossed for him and them – he is such a handsome, gentle giant that just needs a second chance in life.
Lastly, I want to introduce Princess to you. I couldn’t before because I found her story so upsetting but now that I’m feeling far more robust I can share. (see piccie in the field)
I got a call from an inspector saying she had rescued a dog from abandonment. She was very underweight, had not been fed for days and had drunk the toilet bowl dry, even though it was covered in human excrement. The owner came forward and said that she had found the dog 6 months previously but had not taken her out through fear of reprisals from neighbours – the property was covered in 6 months worth of dog urine and faeces and a child had been living in those conditions too. Princess was signed over and monitored for weight gain as blood tests revealed she had been without food for sometime and her body had started using it’s reserves to keep her going. A case is being made against her former owner and she will hopefully be successfully prosecuted but you can see why I found this so upsetting after Aslan and Dribbles, it was like the final straw.
Anyway, what I can tell you is that Princess is doing brilliantly and is the most wonderful poppet you could wish to meet. She is so loving, friendly and a great all rounder. We think she is Jack Russel cross Staffie and will make a wonderful first dog or family dog. Let’s hope she isn’t with us for too long.
So, not a bad week in all, especially because we also found homes for our long stay pair of cats – Olivia and Ebony and for new arrivals, mum and daughter cats Susie and Felix – just wonderful. Just need to find homes for the 43 others now!