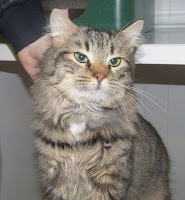 Well the first week of the year didn’t start off great, and I have to say I was worried it was a sign of things to come. But the week ended on such a high that it just goes to show what a variable and unpredictable line of work we are in.

The beginning of January was D-Day for two of our bunnies who we had been trying to help overcome dental disease for about 5-6 months. I had a sleepless night before I was due to take them to the vets but remained hopeful. However, it was a shock to find that the one we were most hopeful with was the one we had not been successful with. Her teeth were simply out of control and wouldn’t matter what we did she would need regular dentals for the rest of her life, which of course means two things – putting her through repeated procedures and her unlikely to ever find a home.

Euthanizing a rabbit because of dental disease used to be completely against my principles, but over the years I have come to accept the implications on both the rabbit and the charity. It is just a very horrible, harsh fact of life that there isn’t a bottomless pot of money and an unlimited number of homes out there. I am still stunned that we have so many of beautiful rex bunnies, many of which are still babies, still waiting for homes – in fact we have over 20 adorable bunnies and I cannot for one minute understand why we still have Beano, who has been with us since May last year.

The next day wasn’t anymore fun when I got the call to say Dante the guinea pig had had a stroke. I rushed to get him to the vets but he died along the way. He was in such a mess that it really was the best thing. But knowing that he had been rescued from awful conditions and never found a home sits really uncomfortably. And he also leaves behind his brother Caesar, so next week we will get him castrated to increase his chance of being adopted and paired up with a girl or two.

But despite this shaky start we had some great highs. The best, of course, is always the reserve of animals, and we started the week well! Jessie and Josie the dinky staffie sisters were reserved to live with each other (and leave us next week), then there was Autumn and Harley the cats and Twiglet, Pablo and Eugene bunnies!

We also had quite a few new admissions too – 3 adult cats, 3 tiny 2-3 week old kittens found abandoned in a box and two new dogs. In fact, we have done so well on dog rehoming of late that everyone is so new that they are all still under assessment and we don’t actually have anyone up for adoption yet, which means with Jessie and Josie going we don’t have any dogs available for adoption – that is simply amazing!

But perhaps what has touched me the most this week has been the generosity of people – we had a retired lady give us a chocolate tin full of copper collected over two years, local music shop Johnny Roadhouse collected another box full amounting to £42, we received the most incredible cheque for £530 from local business Swinton Group with a letter explaining that the staff had collected the money for us throughout 2010 – we totally knew nothing about it and were just stunned and delighted.

There was one other surprise that arrived late Friday afternoon, a huge parcel with an anonymous note signed ‘C’. Inside was amazing cat gifts, including a lovely fluffy cat bed in response to our appeal for donations of cat beds. Our gorgeous tiger Sam will be the lucky recipient of the cat bed because he is huge and with love stretching out on it, whilst the 3 hand-rear kittens have got the fleecy blanket to snuggle on and all the cats will get to enjoy the treats that were sent too.

I just want to say thank you to everyone who has helped the animals this week, you have renewed my hope for 2011 and the future of our animals.