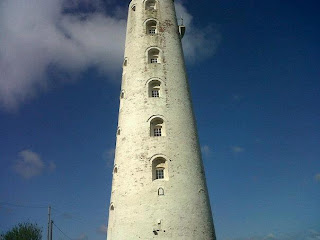 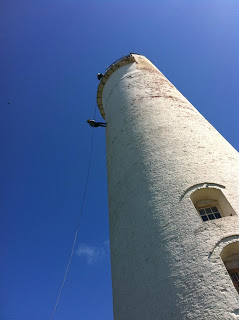 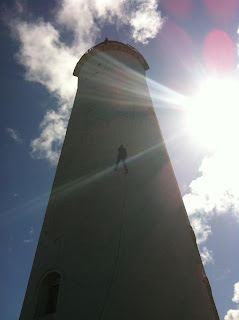 I’m not sure if it’s sun-burn, wind-burn or a combination of both but I’m sat here nursing a sore face. Admittedly a weird thing to report but it’s all because of the exhilarating day we’ve had on the Wirral coast.

I arrived at Leasowe Lighthouse at 8.50am this morning in preparation for the first of 30 intrepid abseilers to arrive to take the challenge of their lives – to abseil down Europe’s tallest lighthouse; a phenomenal 101ft high!

Looking up to the top of the lighthouse, with the clouds swirling around in the sky,  made me woozy and nauseous. How on earth the participants coped once they reached the top, I just don’t know, but they had to tackle 130+ open steps first to get to the top. I only went to the first floor, to use the staff loo, and my legs went like jelly having to come back down the open steps and I clung to the walls like my life depended on it. Head for heights? Me? No chance!

Over the next 4 hours I watched with the greatest of pride as our wonderful supporters took the ultimate leap of faith and placed their lives in the hands of some odd bits of rope. The tension waiting to take turns at the top of the lighthouse must have been virtually palpable because on the ground floor it was immense. I understand there were a few wobbles and worries  at the top but everyone overcame their nerves and rose to the challenge but not before digging deep to find their braves first. 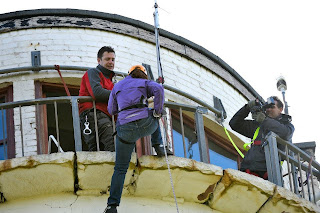 Those who could bear to look said the view was stunning. Others felt brave enough to share a wave or join in with the cajoling cries of support. By far my favourite was our Hannah declaring part way down, “This is your fault Susie Hughes!” But others couldn’t even bear to open their eyes the fear had gripped them so tightly. And you could see so many of the abseilers shaking with fear as they descended.

I received frequent reports that the worst bit was getting over the edge of the lighthouse’ platform. I watched over and over again as it tried to defeat the abseilers, but each and every one of them made it over, albeit not always gracefully, but who cares about grace when you are 10 stories high! And while the majority tentatively took their time ‘walking’ down the building, others boldly bounced like pros. But whatever the style they all conquered the challenge of a life-time with many wanting to do it all over again! 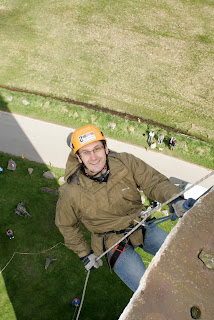 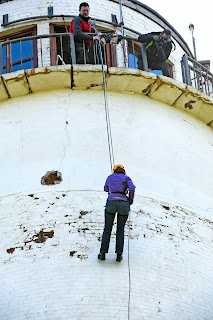 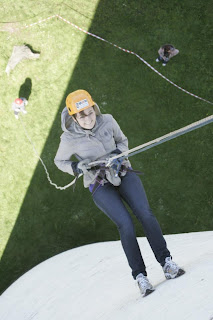 Perhaps the funniest thing was the reports that the only thing that could be heard from the top was my mouth! That makes me so happy, the thought that I can spread my support so far and high. Or rather, just as people nearly plunged to their death they had my gob ringing through their ears (teehee).

The weather was incredible and added a stunning back drop to proceedings. Although there was a brusque wind, the sun shone loud and proud and kept us heated throughout the day. But I don’t think the cosy, warm feeling was as a result of the weather but rather the elation of such a successful event. It is all down to the incredible courage of the participants and the generosity of their sponsors. But thanks must also go to the fantastic team at the Lighthouse who seemingly effortlessly organised the proceedings; they were truly brilliant. 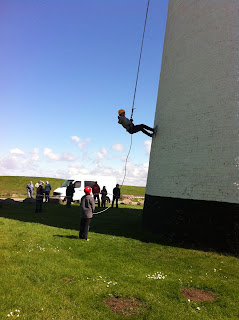 My hands are still throbbing from all the clapping, so it just goes to show how much fun it was and just how proud I was of each and every participant. The heroic team of abseilers deserve the biggest of CONGRATULATIONS for their incredible achievement. Between them they have not only conquered the tallest lighthouse in Europe but they have done our charity proud and raised over £3k. What a stunning outcome. Thank you everyone for making it happen. It means we can help many more animals live a life worth living.