by RSPCA Manchester and Salford Branch | May 7, 2010 | Blog, Uncategorized | 0 comments 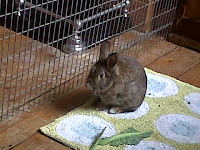 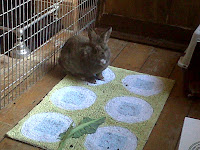 It has been a roller coaster week of emotions and I’m ending the week with 10 rabbits in the house.

I started this shortened week compiling my usual end of month reports and by Tuesday lunchtime it was looking like it was going to be a nice and quiet week and I could finally get on with some fundraising planning, I mean i even spent time dilly-dallying over what categories we would have in our Fun Dog Show this year, but within a matter of hours the equilibrium was shattered and there-in started my roller coaster week…..thank god it was only 4 days long, but having said that, all the bunny mess I’m going to have to clear up this morning is not amusing!

The inspectors have been overwhelmed with abandoned cats and kittens this week and I suspect with there having been such a deluge, euthanasia may have ended up on the cards in some cases – it really has been that bad. By Tuesday afternoon I had a mum kitten and an entire male taking up residence in our offices, by the following morning another pretty kitty had joined the clan too (obviously not all living together, that would be stupid).

Mum and kitten are now called Abby & Gayle (check them out on our website) and they were unneutered and living with an unneutered male! I had to get them to the vets asap and so the next day they were ‘done’ and yes, one of them had early signs of pregnancy. Tut. I won’t even tell you the bullshit story we got about them or else I’d be here all day, but needless to say they were not strays, they were owned by the ‘finder’, or at least she didn’t deny it when the inspector put it to her.

The entire male was imaginatively named Tom by the inspector who rescued him and within 12 hours he had stunk the 1st and 2nd floors of our building out! He was taken for neutering immediately and much to my elation he turned up FIV+. That sounds weird, so i best explain…

….some years ago a group of leading animal welfare charities got together on this matter and agreed that all cats that tested positive for FIV or FeLV should be euthanized. So it became set in stone as a policy that we had to abide by but last year we decided against this policy because the chance of an FIV+ cat transmitting it from one to another is 1-2% and it does not necessarily shorten their life span nor does it necessarily compromise their health. It took 3 committee meetings of debating with various bods advising us and in the end we chose not to put to sleep these kitties. We are very proud of this policy and Tom became the first kitty to test positive for FIV since we adopted this policy a year ago! Tom can only be rehomed as a house cat on his own (unless the potential adopter has other positive kitties) and I am so chuffed because he is such a lovely guy.

But by the end of play on Wednesday my elation had dropped to desperation when new kitty Sindy arrived with pendulous titties and a swollen belly – allegedly having been found in a box in Urmston – but the ‘finder’ couldn’t show the inspector the box, so no doubt another bullshit story. Following examination it transpired that she wasn’t pregnant but rather had not long given birth. I shall contain my expletives at this point and leave you with it to think about. B*****ds.

Thursday was just the pits….our cat Dinky, who has been battling with cystits for 2weeks was getting a whole lot worse. She was urinating a lot of blood, drinking buckets and totally spacing out. Dinky was stray for a very long time and still has the terrible fur matting and dental disease she came in with, we’ve had to get her urine infection sorted first, which 2 weeks ago saw her urinating puss and blood, she is still in a scrag-taggle state.

Then on the same day newbie rabbits Vincent and Domino from our ‘fleeing domestic violence fostering scheme’ were found to be suffering with terrible dental disease and Vincent, who just has one ear (yes, groaning is allowed), was found to have an abscess tracking down where the ear canal would be. I went home feeling very low and facing the very real possibility of euthanasia for all 3 the following day depending on what the exploratory investigations revealed – just the pits.

I finally got home at 7pm Thursday night when Catherine texted me to say….I’ve just seen a stray rabbit on a busy main road whilst walking Juno. I checked what the bunny looked like and Catherine described the image of a wildy, but she persuaded me to go out with her, so off I went back to Chorlton and the two us went ‘hunting wabbit’.

Wow did we strike gold! Pictured is Henrietta, Hetty for short, she is an agouti lionhead and a very pretty one at that. She seems to me to be pregnant, which is slightly shattering to say the least cos the last thing i need is a litter of baby bunnies in the house. But because there is a 7 day law for stray cats and dogs, i.e. they can’t be rehomed, neutered etc for 7 days, I thought it best to apply it to the bunyip too, so she is sitting it out in my home for a week just in case sprogletts come along. If not she will be scanned in 7 days and hopefully neutered and be up for adoption. She is a very pretty lady so I’m confident she will be snapped up.

So, Friday finally arrived and we took in 2 new dogs…..guess what breed they are? Yes. you’ve guessed it, staffies. Two girls seized by police during raids on premises potentially used for dog fighting. But I have been given the utmost reassurances that they were not used in any shape or form and are very lovely dogs, but you’ll understand my reservations on this one, but i suspect as soon as i meet the dogs I’ll fall in love, such is the way with me and staffies and rotties.

My mood was greatly lifted with the news that the two bunny boys should be able to overcome their dental problems with corrective diet – i.e. no dried food! And that Vincent’s abscess was not too impossible to overcome, so because he is on antibiotic injections for the next 3 months the boys had to come home with me. Just what I needed.

Dinky’s second urine sample showed she was improving , as was the space cadet impression, so she is in our offices (for there is nowhere else for her to go) and Catherine and I will be monitoring her for the next few days and if she makes a good improvement then we will test her kidney functions.

But then, just as the day was looking better one of our bunnies in boarding had to be rushed to the vets with a very very nasty bite wound and infection on the lip. No idea how it could have even happened but needless to say she had to come home wth me for 3 weeks of antibiotic injections. At which point had a count of 10 bunnies in the house 3 ailing, one possibly pregnant and the rest being my grumpy lot who are deeply offended by the intrusion!

Of course, as always, there were many more stressors during the week, and a particular one, that I cannot talk about, really did tip me over. My quiet week never happened, I’ve had to bring loads of work home but I’m pleased to report that Jack the greyhound is doing well, and had a jolly good scale and polish of his teeth yesterday. We also found out about his history from his ear tattoo and now know his date of birth, how many siblings he had and how many went on to be racers, one even got killed in training in Ireland. VILE.

The highlight was undoubtedly getting pictures of Diaz, Sasha and Princess in their new homes – all of which you’ll be able to see on our website under ‘success stories’ – and of course saving Tom from death. But what I neglected to tell you was that in April we rehomed 28 animals – just brilliant, and makes this roller coaster ride a helluva lot more worthwhile.