A Day in the Life of the Branch

I thought it was high-time I shared what a typical day entails for us at RSPCA Manchester and Salford Branch. I hope you enjoy spending ‘the day’ walking in our shoes…..

8.30am
I set off with my foster bunny Claude knowing that this maybe the last I see of him. He is very poorly and about to undergo further tests to determine his future. I’ve fallen for the big fella big style and will adopt him if he can be helped. Another giant bunny named Summer is being dropped off at the vets by Catherine for a third lot of tests; she is very ill too. So, it’s D-Day for two much loved rabbits today and I’m not looking forward to it one bit.

On the way to the vets I stop off at the RSPCA Greater Manchester Animal Hospital in Salford to collect a mum and kittens that have been removed from their owner. 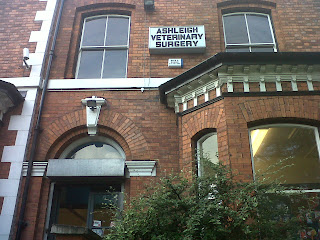 On to Chorlton to drop off Claude at an Exotic Vet Specialist we exclusively use for all our small furries. I then I have to swing by the office to collect supplies for Willow and co and then on to foster mum Julie’s house, which is just down the road.

10.00am
I’m back off up to the RSPCA Greater Manchester Animal Hospital to collect 6 kittens that have been neutered and stayed in overnight to take part in a post-op pain management trial. The RSPCA vets neuter kittens and puppies from approx 8-9weeks old. It sounds incredibly young but the recovery rate is so quick because there is so little to remove. It has been successfully done like this for a number of years and is something our branch fully supports.

Whilst I’m at the vets I meet Inspector Jennings. She has a stray cat with her whose eye is hanging out of it’s socket. The eye is very much ‘dead’ but despite this revolting injury she is a super friendly and affectionate little black and white girl. I commit there and then to taking her in when she’s ready to be rehomed.

I set off with the six kittens to their foster home in Walkden. One of the kittens was too small to be done and stayed at home so we are keen to reunite him with his friends. They have all been named after the Seven Dwarves and will go up for adoption now they have been neutered, vaccinated and microchipped.

I’m off to the cash and carry now to stock up on cat litter for our foster carers. We officially have a record number of cats and kittens in our care and have had to close to admissions (although we have a number of cats lined up for next week to admit). The bill is £118, which whilst not great, it could be a lot worse, and has been! My small car groans with the weight of it all but just by luck I run into Catherine, as I return to the RSPCA Greater Manchester Animal Hospital for the third time to collect another kitten called Lion. I offload lots of the litter into our ‘animal van’ and get to see Macey pup.

It sounds crazy to keep bouncing back and forward to the RSPCA vets but all the foster homes are in different directions. So rather than put the animals through unnecessary distress of travelling around for hours we’d rather do it this way.

It’s love in an instant as I meet little Lion. He is a 5 month old all black kitten that was found hiding behind some bins. He had nasty chemical burns to his side and has been recovering for 8 days at the RSPCA vets. Unfortunately our third member of the team, Debs, is off sick and in a terrible way and can’t take him in to foster until she is better. So, little Lion is coming to stay in the office. It’s been a long while since we had an ‘office cat’ so it will be great to have a furry around the place.

12.30
Finally I arrive at the office and it’s lunchtime but there’s no time for food. Catherine and I have been out on the road all morning and there’s 15 calls on the answer machine to get through. I’m due back out on the road again in an hour and a half to take 3 cats to the vets, but Catherine lands at the office and opts to swap jobs with me. I get office duty and to catch up on all our outstanding admission paper work and health record updates.

Lion quickly reveals that he has been taken away from his siblings at far too young an age. He has no idea about claw inhibition and it soon becomes apparent that this loving little boy is going to need a very special owner indeed. He means no harm but his claws are out all the time. He definitely needs a playmate too. Lion will  take a long while to rehome, which is such a shame.

The call I dread comes in. It’s the results of Summer and Claude. After an agonising conversation with the vet the conclusion reached is to put Summer to sleep and to retest Claude in 3 weeks time. I can’t bear sharing the news with everyone, so I don’t. And whilst it’s better news for Claude it is bitter-sweet because we still don’t know what’s really going on with him and I fear it will still end in heartache down the line.

Two calls come in for us to admit two dogs. One is Paddy and the other is Jay-Jay. We only admit animals that our field staff rescue. The story of Paddy is really quite upsetting and the inspector repeatedly warns me about his body condition. I don’t hesitate to accept both dogs but little did I know what we were letting ourselves in for.

Time in the office is up. I have to collect Claude and there are still many outstanding jobs. The weekend ahead is looking like another ‘catch-up’ one for me. After collecting Claude I go to meet our foster mum Emma who has prepared all the photos from our lighthouse abseil challenge. Emma also does our cattery photos; they are so illustrative and beautiful.

Little did I know that Emma and her partner Chris had a little surprise for me. I was absolutely stunned when she opened the boot of her car. It really made my day! We had run out of cat food last week and so many people have rallied around to help us. I feel honoured to be surrounded by such wonderful people.

6pm
I arrive home just before 6pm. I’m supposed to be in Offerton at 6.30pm and I’m starving and my house full of 9 rabbits are jumping around too! After a pit stop to sort everyone out I set off again because the day is not quite over yet. I’m going to visit potential adopter Emma and her bunny Oscar. They have our girl Twiggy at home with a view to bonding her with Oscar. I’m going round to help with the first introduction, as it can be quite nerve wracking. The bunnies have been living side-by-side for 3 weeks and all the signs are great.

(Twiggy’s original owner has recently been successfully prosecuted for neglecting her. She left Twiggy and her companion to die. Her companion did die but Twiggy was rescued just in time. I will never forget the day the Inspector rang me at the point of rescue.)

Unfortunately the intros broke down a few days later after Twiggy escaped from her pen and attacked Oscar. We are going to try and salvage it but it just illustrates how difficult it can be to get a compatible match with bunnies.

I leave Offerton at 7.30pm and have one last stop of the day. On my way home I’m dropping off litter to our foster mum Anne. She has two lots of mum and kittens in her care. We’ve never placed two with anyone before but Anne knows the crisis we are in and offered to take another family in. I’ve known Anne for over a decade and she is so fantastic and an absolute rock. I call her for kitten advice whenever we need it and she always comes up trumps.

Anne’s second mum and kits have come from a desperate situation. Another multi-cat household with a substance dependent owner. Mum cat Pepsi is a bag of nerves and keeps moving her kittens to hide them; she clearly feels very vulnerable. Pepsi and co couldn’t be in better hands but they are a complete contrast to Anne’s other feline family, Maysie and co, who are just amazingly confident, friendly and affectionate.

8.15pm
I arrive home. I haven’t had time today to check office emails and I’m too tired to do it now. Thankfully I have Hannah who checks the emails in her lunch break at work and only leaves messages that she can’t answer. I’m truly shattered. Time for food, fusses with the bunnies and bed to get up tomorrow and start it all over again.