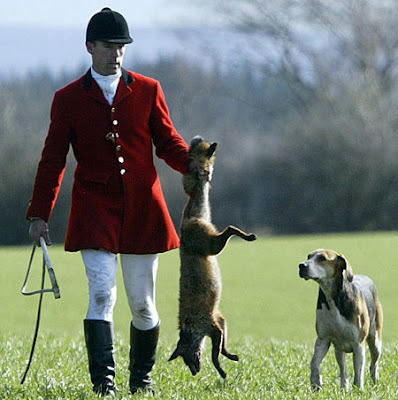 Having grown up in rural Cheshire I can remember each year the hunt riding out across the fields where I lived every Boxing Day. I’m not sure I really comprehended what was going on but it never intrigued me to join them or pay any interest in their cruel theatre of ‘sport’.

The recent press coverage that the Tories will overturn the ban on hunting wild animals has horrified me and if it happened I would be ashamed to call myself British/English because the one thing I feel most proud of about this country is the fact that we have some of the best animal welfare laws in the world.

I wanted to share with you details of a recent press release from the RSPCA in the hope that I can inspire you to vote sensibly in the next election and not be complacent and leave to someone else to do!

The RSPCA has released figures to show that the 2004 Hunting Act is more successful at bringing crimes against wildlife than any other wildlife legislation. The Hunting Act has it’s 5th Anniversary in Feb 2010 and here is how it has helped so far in securing convictions compared to other wildlife acts:
Badgers Act 1991 = 6
Deer Act 1991 = 1
Wild Mammals Protection Act 1996 = 3
Hunting Act 2004 = 48

In addition the success rate for prosecutions under the Hunting Act is 77%, which is way higher than for any other act.

Probably the best news of all has come from the European Court of Human Rights, who, on 17 Dec 2009, ruled that challenges to the act so far were inadmissible as they did not contravene human rights, e.g. to make a living etc out of the so-called sport.

And you might want to check out this website too: huntingact.org which has been set up by lead animal welfare groups to help advise law enforcers on the distinction between legal and illegal hunting.

Please don’t be complacent about voting in the 2010 elections, your vote really will make a difference to animal welfare. This is your chance to make a stand and save our wildlife from cruelty in the name of sport.