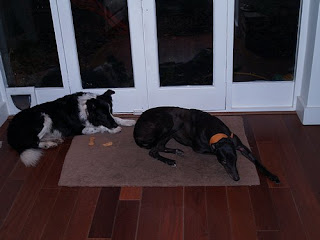 On Monday I took a call from a gentleman interested in adopting a dog from us. His dog Molly had passed away just 10 days previously but he was spurred on to find a new member of the family because his other dog Finbar was so desperately missing his mate.

His first choice was our Elkhound Sasha but as we had a viewing of her that day, and somebody else in reserve for her, we couldn’t take any more interest so I referred him to our website. A short while later he called back to express an interest in Lady, our greyhound. We chatted about her history and greyhounds in general and left the conversation with the gentleman going away to think some more.

Now, most of you know we don’t have our own animal centre and instead we use private boarding kennels for the animals that aren’t in foster homes. So, this means we go round to visit the cats, dogs and small furries several times a week (which also means we aren’t in the office 9-5 because we are with the fluffs) and so on Tuesday morning I was with the bunnies when a call came from the kennels……

They had rung to say a customer of theirs had popped along and taken a shine to Lady and could they have a look at her whilst they were there. We had a bit of a chat and strangely enough it sounded like the same gentleman who I had spoken to the day before, and it was!

It turned out that the kennel owners had known the people for many years and knew them really well and were able to give the most wonderful recommendation, so I didn’t hesitate to let them see Lady. (Usually we do viewings by appointment only and with our staff conducting them but with Lady being so placid and well behaved I had no qualms at all.)

About half an hour later I got another call from the kennels to say they definitely wanted her and in fact she had jumped into the back of their land rover to go home with them so I said if they want take her now they can, and they did!

Later that day I got the full story of how Lady’s adopter was at the kennels (cos at the time it wasn’t appropriate to have a long natter). It turned out that Bob (Lady’s new dad) had gone down to the kennels with Finbar to share the news of Molly dog’s passing. In conversation Bob happened to mention how he had seen Lady the dog on the internet and asked if the kennels knew where the RSPCA might board their dogs. So, with great amusement the kennel owners turned and pointed to our Lady and said, “You mean this Lady?” You can imagine then how it all unfolded with astonishment and delight. It is just magic stuff and certainly everyone felt it was just meant to be.

Later in the day Bob rung to tell me that Lady was fast asleep with Finbar by her side, all besotted like! And on Saturday we met up with Lady and Bob at the vets for us to get her second vaccination done and it was plain to see just how happy Lady was with her new family and just how much they loved her already.

And to my absolute delight this morning I found a message on Facebook with this beautiful picture letting me know how well she has settled in and how lucky they feel to have such a beautiful new addition to the family. Lady looks so content in her new home with the very handsome Finbar. What a wonderful new start to her life she has, something Lady truly deserves after living her life in kennels. I can’t thank Bob and his partner and Finbar enough for opening their hearts and home to her. Merry Christmas to you all.