Just letting you know how great they are both doing since we adopted them in December last year. As you can imagine, they’ve really settled in well and truly made themselves at home! 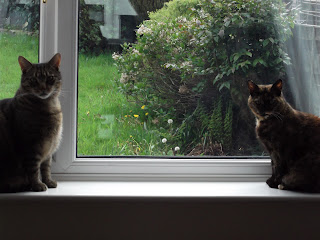 We’ve discovered that Johnny isn’t quite the macho man he appears to be – despite being very big boned! He towers over all the other cats in the neighbourhood…but he really is a pussy cat. He wouldn’t harm a fly…(though field mice are a different story – he brought one home the other week after finding it in our garden! It was still alive, blinking in his jaws! I managed to make him drop it – that was one lucky mouse!). He also loves his food (a little too much) and tends to sit begging at meal times if he smells anything meaty or fishy! He’s also very vocal, and we have many a chat (my husband think’s Ive lost the plot!) 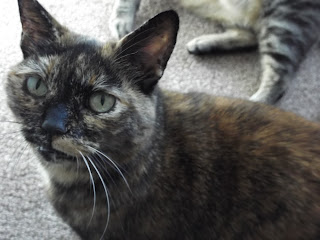 Betty has been the biggest surprise. She’s transformed from sulky nervous Betty to cocky attention seeking Betty! She’s the house guard dog, chasing off all other cats who dare to approach (despite her being so tiny!). She loves to sit on your lap being cooed over. Infact, as I write this email she is rubbing her nose up the edge of the laptop! Her favourite past time is playing with her favourite toy, chasing the feathery tail around the livingroom. She often sits and cries after her breakfast waiting to be played with. Infact, she plays with her favourite toy so often that weve had to replace it 3 times due to it being worn out! 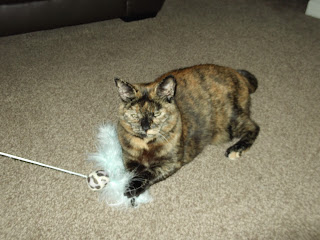 We had a cat flap fitted back in March, and since then theyve both been able to go and return at their leisure during the day. Though to be honest, they never go further than our neighbours houses, and they always come home when I call (and neither of them like the rain!). 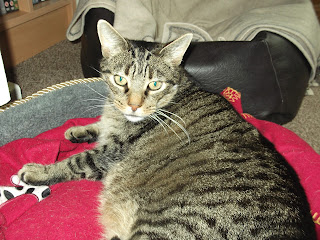 In summary, we love them both to bits, and I think they love us just as much in return.