We adopted Bowie a year ago now. We already had a 2 year old cat called Ramos who decided to adopt us when his owner moved house and left him behind. Knowing Ramos was used to living with other cats, after several months it was time to get him a friend. 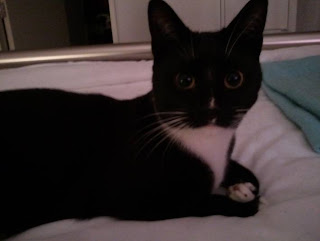 Originally, I’d planned to adopt an adult cat, knowing that they’re often overlooked in favour of kittens but when I saw a black and white tuxedo kitten called Bowie and read his story it was love at first sight. He was incredibly skinny and had been found lost on the streets all alone. I showed his pic to my other half and we arranged to visit him at his foster home.
When we arrived we were greeted by two very confident kittens, but little Bowie was hiding behind the sofa. Once his foster parent coaxed him out, it was apparent just how skinny he was compared to the other kittens. He was soon headbutting us and he purred the whole time we were there so it was clear that he liked us as much as we liked him. I quickly mailed the team to let them know we’d be adopting him.
When we went to pick him up he was hiding behind the sofa again and something was mentioned about his meow. I didn’t think much about it, then in the car I completely understood. Boy could this kitten meow! Such a tiny little thing but the loudest meow I’d ever heard! When we got home, I sat with him in the hallway – I’d sectioned it off, put lots of toys out, litter tray and cave basket for him to hide in and feel safe. At first he went in the cave, but it didn’t take long before he came out for a cuddle and to sniff out his new surroundings. He was soon purring loudly! (this was to be a frequent thing and earned him the nickname ‘The purr-minator’) He didn’t like being left on his own so I let him out and he soon snuggled up next to me on the sofa and fell asleep. 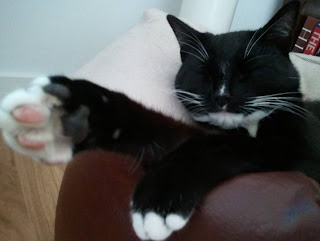 The first few days were really hard. Bowie stayed in the second bedroom. Ramos had discovered the newcomer and spent his time growling and hissing at the door (and even at me!) – I’d never seen my cat like that before and it was quite a shock! At night Bowie scratched up all the carpet trying to get out and cried the whole time. We barely slept and I was worried I’d made the wrong decision to get Ramos a friend. I phoned Susie at the branch and she was incredibly supportive. She found out that Bowie had slept on his foster parents bed so that night we let him sleep with us and got a whole nights sleep. Things seemed much better – even Ramos never slept through a whole night! 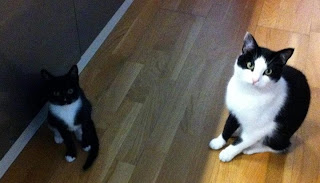 Bowie immediately loved Ramos. He’d run up to him when he came in the house and follow him everywhere, only to be greeted by growling or hissing and the odd swat to stay away. Luckily Bowie wasn’t bothered by this at all so we stuck with it, seeing small changes in Ramos, such as stopping growling then letting Bowie nearer without hissing. It took a whole 6 months before Ramos very suddenly decided to accept Bowie. They started to play fight, chase each other and sleep near each other – they had become friends! 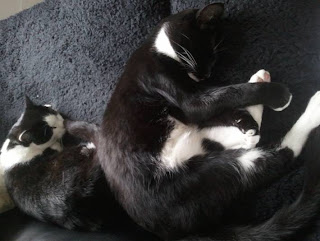 After a year, Bowie is much the same as he was as a kitten. He’s very vocal, is still a scaredy cat with strangers, purrs a lot, still headbutts when he greets us and still sleeps on his back with all 4 paws in the air! He’s very gentle and has never once bitten or scratched. When we’re in another room or if he wants attention he’ll do his very unique loud meow that’s almost like a yodel. He still loves being picked up, cuddled and playing with his favourite toy. When he wants you to play he’ll find his toy and drop it by your feet then look at you with his big eyes and meow. Ramos knows lots of tricks and Bowie learnt all of these very quickly! If he was braver he’d be a candidate for Britain’s Got Talent! The only thing that’s changed is his independence and his size – he loves being outdoors and he’s grown into a very tall and long cat! When he gets his first proper winter coat he will be a strapping boy and Ramos will be even more grateful of his new friend. Bowie has been a fabulous addition to our family. 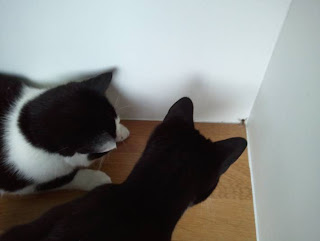 I’d recommend everyone to adopt from the RSPCA Manchester & Salford Branch. You may think it’s cheaper to get a cat or kitten from the local paper but when I took on Ramos, I easily spent over £100 on neutering, vaccinations, tests, de-fleaing and de-worming. He also kept getting into fights and hurting himself (more vet costs!) as his previous owner hadn’t bothered to neuter him. All the RSPCA ask for is £50 (which includes neuter, chip, vaccinations, flea/worm treatment and a vet check) and you know that you’re making a real difference to a cat who’s had a hard start in life and desperately needs your love. 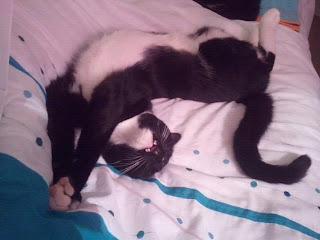