I don’t bat the word ‘stressful’ around too often, ‘under pressure’ is my preferred term, but this week has been truly stressful and not just because I’ve been working long hours to make sure everything is up-to-date before I go on leave for 10 days.

We’ve officially hit holiday season. I can tell when we have because we see a dramatic drop in cat and dog adoptions and massive increase in stray cat calls. It means two things: cracking animals get left waiting for new homes in kennels/cattery for twice, if not three times, as long as they normally would, and we have to close to admissions. Having said that,we still have 10 cats waiting to come in. The situation is dire.

I think, on balance, the dogs waiting longer for homes troubles me the most. A kennel is such an alien environment for a pet dog to be in, so the worry about their ability to cope sets in after a few weeks. The only dog out of the 5 we have in kennels at the moment who genuinely seems content is Teebo.

Teebo maybe a bit brute-like looking dog but he really his a lovely natured lad. He is so easy going and demands so little from you, other than to take his teddy bear out with him on walks. It really is the funniest thing you have ever seen – this wolf-sized dog holding his teddy in his mouth. If Teebo stops to sniff at something his teddy gets dropped, but never forgotten and soon gets picked up again!

We have several teddies that look the same so we can swap them when one becomes really revolting. Teebo’s other pleasure in life is mooching in the paddock. So much so that on good weather days he gets to spend hours at a time just pleasing himself, pottering around and lolloping in the shade.Teebo is a really easy dog to please, we just need someone with a big enclosed garden to adopt him and his life would be complete. 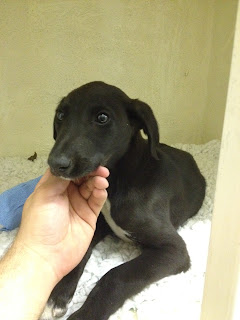 This little Lurcher pup came to our attention on Thursday. He was found stray the day before with a broken leg and taken to a vet practice where the brother of one of our trustees works, up in Cumbria.This little boy was only 6 weeks old and had been left to roam in significant pain until a kind Samaritan found him.

The vets named him Trevor and set about trying to help him. What ensued was a day of negotiations with various organisations until the agreement was reached that we would fund the surgery he required and take him into our care, rehabilitate and rehome him. We were thrilled to be getting this little lad and being able to give him the chance of a really happy ending, but the following morning, at 8.30am, that elation was cut short.

I received a call from the vets to say they had x-rayed his other leg to take measurements for length and discovered his hip was broken too. The decision was simple, such a little boy could not be put through two lots of major surgery; he had to be put to sleep. Without question it was the right thing to do because such serious fractures, on opposing sides of his body, could result in so many complications and mean him confined to a cage for months on end and create all manner of health and behavioural problems.

It got me thinking about two things: what had happened to him and what about all the other animals we don’t, inevitably, get to know about who similarly have to be put to sleep with injuries following rescue. It is because of the latter that I felt the need to share Trevor’s story, almost like a tribute to all the other animals that go unheard of: lives, personalities, ‘faces’ – that have been failed in some way.

In Trevor’s case, I am confident about his origin but don’t feel I can share it publicly through fear of reprisal. I can say this much; I believe he was intentionally abandoned when it became apparent he was injured and would cost money to fix. For me this is nothing more than cowardly and abhorrent, but speaks volumes about the way in which many animals are viewed as mere ‘tools’.

We have three of the ‘seven dwarves‘ still looking for homes. The other four got snapped up and are settling well into their new homes. The remaining three are coming up to ten weeks old and the longer they are with us the less likely they are to find homes. This worries me no end.

We have had no interest in them this week, largely, I think, because we have had three new kitties become available. They were snapped up within 24 hours of going up for adoption. I’m not surprised because they have the cutesy factor at 8 weeks of age and really are adorable kitties, but what it means is that our three black/black and whites are getting overlooked. This is especially tragic because they have been hand-reared round the clock since a day or two old. The outstanding care they have received from the foster family has resulted in really loving, really well-socialised and really good natured kittens. Their personalities are distinct and delightful and they bring so much joy. But it should be their forever home reaping all the benefit, not the foster family because their job is done. We really need to find homes for them and I really don’t want to come back from leave and find they are still with us.

Somebody said to me this week that people’s avoidance of black animals (whether it be cats or rabbits or dogs) is like a form of racism. That statement amused me, but could there be some truth in it? I think we are just like magpies in that we are attracted to the prettier, shinier ‘objects’ more…..

The greatest source of stress this week came from the news that one of our adopted puppies, now 8-9months old, has been stolen from her home. It’s not something I wish to dwell on, the sense of loss for us all is so great. I hold little hope of finding her, although there are many people doing all they can to help. I’d like to thank everyone for all they are doing and I just hope that whoever has her is taking good care of her.

A holiday couldn’t come at a better time, but could someone please turn the taps off in the sky!!!