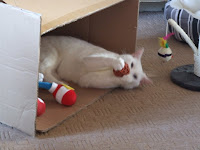 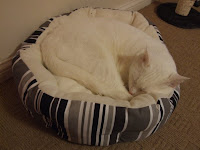 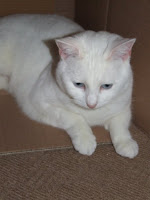 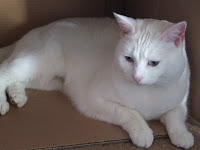 I just had to share this story with you as I was blown off my feet last night.
A few weeks ago, as I was leaving work after a very difficult day, a vet friend rang me to say she had persuaded a client not to euthanize their 4 year old cat and could we take her in. Well, we couldn’t, cos we were overflowing and had turned 5 others away that day from Inspectors and the animal hospital. I asked what was wrong with Lily and other than pooping in the neighbours garden, deafness, being vocal and a bit clumsy – nothing. The owner was apparently at her wits end and thought the cat would be better off dead. So, I said we would take in as soon as we could and we began the hunt for a foster carer.
The next day the owner called me and told me how no-one else would cope with Lily and her noisy, clumsy ways and that we were wrong to take her in and she should be put to sleep. I tried reasoning with the owner (as did the vet) and in the end I said she should be grateful we were helping Lily when we couldn’t help any others.
We found Lily a foster home with Catherine’s neighbour upstairs from her, and there-on in, every morning at 7.30pm religiously, Lily miaowed so loudly for her breakfast that she woke Catherine up! But there was nothing wrong with Lily other than being an active, gobby, confident cat.
We found Lily a home in no time, but with the Christmas period she didn’t go until Monday. She has gone to a lovely young couple who got a glowing report from our home visitor Mark, and in fact I dropped her off cos they live near me and because we needed the space urgently.
When Lily came out of the carrier in her new home she just strutted around like she’d always lived there and was as cocky and confident as anything. The new owners had been fully appraised of Lily’s history and vocal abilities and were completely unphased. Lily took to them instantly, especially her new ‘mum’ and I left feeling happy and aglow at such a lovely outcome.
But the story does not end there!
Last night my friend Hannah texted me. Hannah is one of our trustees and has been with us for nearly a year doing all sorts including home visits and shamelessly promoting us. Hannah said she had just found out on Facebook that Dave’s brother and his girlfriend (Dave being her bloke) had adopted a white cat from us unbeknown to anyone in the family.
I rang her straight away and neither of us could believe it. Not only had I met Dave’s brother without knowing it, Hannah had been in the office at the time I had taken the call from Lily’s previous owner. Hannah said they had even sat round the Christmas dinner table together without a word being said!
Hannah said she was just so delighted that her ‘lecturing’ had paid off about and they had chosen to adopt from our branch and chosen such a suitable cat for their home as Lily as she needs to stay indoors because of her deafness.
The pair of us were just stunned and amazed and so utterly pleased. Hannah is going to visit Lily next week but here are piccies of her in her new home taken by her new mum and dad. She is very content and settled already and has already developed a fascination of climbing into kitchen cupboards!
Thank goodness my vet friend didn’t put Lily to sleep.
Happy New Year everyone, let’s hope it is a better one for the animals.