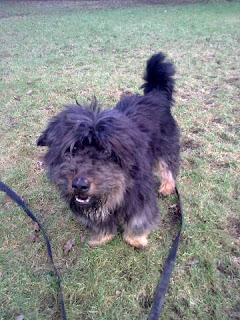 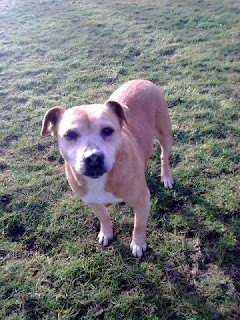 On Monday we received an appeal from the RSPCA inspectorate in Middlesborough. They had 9 dogs from various prosecution cases that they were struggling to find places for now that the cases had concluded in court. They were all oldies and if there was nowhere for them to go they were going to have to be put to sleep.
We had two empty kennels and no dogs lined up for them so I made a call to the Chief Inspector in Middlesborough and arranged to collect two on Wednesday. The CI was elated as we had chosen the one dog he had lost hope for, which was Sandy, because of her age. We also took her mate Rolo but didn’t have the space to take their 3rd house mate Sheba but at least we have been able to throw these two a lifeline.
Except, I’m feeling guilty. The day we collected Rolo and Sandy one of our local inspectors had a dog for us I had to say no to, because we had no space now, and her dog was an oldie too. I confessed what I had done and she was great, saying if you have empty kennels you have to fill them. The spaces had only been empty over the weekend and I really should have waited a day or so, but in all honesty, my guilt is bigger than that.
We are barely rehoming dogs at the moment. Part of the reason will be because we don’t have dogs that people want. I know we aren’t a pet shop but, the logic goes, if we have more ‘desirable’ dogs we will rehome more and therefore be able to help more. But rightly or wrongly we have the philosophy of being willing to take in anyone, which has always sat comfortably with me until last week.
I was chatting with another inspector who was telling me how hard it was to find spaces for animals once cases had concluded because everywhere is full. She said she had to resort to putting to sleep a lovely, happy, healthy dog the week before because there was just nowhere for him to go and the money had run out to keep the him in private kennels.
So, here I am with two dogs, one of which could well end up living her life out with us, when I have probably denied the chance of life to many others. To ease my guilt I’m going to do all that I can to promote her in the hope of giving her old bones somewhere comforting to rest in her last few months. If anyone can help promote her please get in touch.
Sandy is a female staffie aged 14, Rolo is a 9 year old terrier (quite possibly a Tibetan terrier). They are not in kennels together and can be rehomed separately. The story is vile and actually messes with my head when I give it too much thought.
Their owner was prosecuted for “shutting the door on 18 small furries” and leaving them to die. In my house there are currently 10 “small furries” and I truly cannot comprehend how anyone can do that. They would have starved to death. They would have died a slow and miserable death. It is just vile. And sadly not an uncommon phenomenon for the inspectors.
The dogs were not involved in the case but removed nonetheless and the owner has since received a lifetime ban on keeping animals.
I really want to see Sandy in a home as soon as possible. So if you can help, or know of someone who can help, please get in touch.