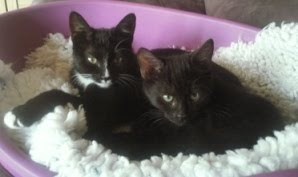 I’ve come to view weekends a welcome opportunity to catch up on work I’ve not got done during the week! I’m feeling slightly less burdened after having done some catch up and used my house cleaning time to come up with some new ideas such as a Christmas shoe box appeal for our animals…I’ll share more when I’ve written the press release.
I’ve been having a flutter today about whether people are going to show up to the Christmas Fair. As it’s our first ever one I don’t want to go mad on lots of paid ads in the newspapers but then at the same time I don’t want it to be a washout – just don’t know whether it’s best to run another this week or not. Hubby says no cos it’s £50 a time, so I’m going to go out leafleting shoppers and lamp posts in the area and try and dress up as rudolf too in the process. I am beginning to question my sanity!
My other anxiety is the slowing up of rehomings. Last week we only rehomed one cat and one kitten – you can so tell that “the holidays are coming” – said in the words of Santa Coca Cola advert. I have had some very welcome news tho this week, which is that Ashleigh Vets in Chorlton are running their annual pet food donation scheme again this year and are going to donate it all to us. which is just truly fantastic, and, they have also been exceptionally generous this week in donating a car full of kitten and puppy food. Let me tell you, my little furry folk are loving it!
Speaking of which I really must tell you all about Petey and Meg….
The little one with the white stripe on her face is Meg, so named after the drummer of the White Stripes – yeah, I know, lame – no one, and I mean no-one, has remotely been amused by this except me. Anyway she is now about 18 weeks old and has been waiting a home for going on 5 to 6 weeks now. She was found stray in the Trafford area, the finder wanted to keep her but wouldn’t pay the £50 adoption fee (which goes nowhere near the cost of blood testing ,neutering, vaccinating and microchipping) so she stayed with me and Petey, who was found abandoned in Middleton in a cardboard box at just 5 week old. Petey is now about 12 weeks old and the love of my life.
The pair of them have been together so long now that they are inseparable, so I absolutely have to find them a home together – they are both proper bonkers and only go to sleep to get up the energy to start running around together and beat hell out of each other. But when they do sleep they wrap their paws around each other and snuggle up, it is just soooo cute.
With Petey having been separated from his mum too young he is a bit of a head peck. Even if you just kneel down he is there on your lap. Petey really needs a home where someone is around an awful lot because all he ever wants to do (aside from hi-jinx with Meg) is snuggle down for some attention with his human pals.
Whilst I’m really sad they haven’t found a home yet, it means I get to snuggle up with Petey and watch X Factor. Speaking of which, the results show is on, so I best get going. But, before I do, can I just say that I thought Joe was outstanding last night. Since day one he has reminded of a young Georgey Michaels and last night just confirmed for me how talented he really is. Long live Mr Michaels Sir!